Our Dog Is So Nutty: The Lemon Candy Caper

Rita, as I've mentioned before, is very picky. She's not much of a beggar because of it. Even things that normal dogs love (peanut butter, yogurt, etc.) don't get her excited. And there are some things she flat-out hates, like anything citrusy.

So one day when she took an interest in these sour lemon hard candies on our coffee table, I was curious as to why. These were definitely a novelty (I'd never bought them before) and she's usually interested in new things so I thought maybe she was just checking them out and making sure they weren't up to no good.

We're Walking Here... Or Not

As I mentioned last Monday, we're dog-sitting our nephew, Reggie the corgi, at the moment.

Here's a pic of Rita and Reg on our walk the other day. Of a twenty minute walk, about 13 seconds of it looked nice and organized like they are in this photo. 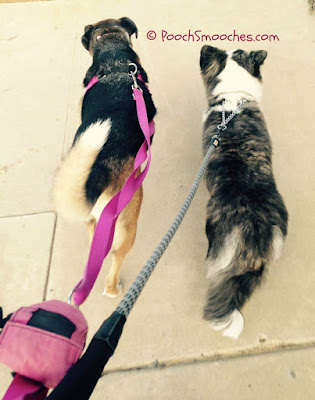 Back long ago when I first started this blog, we had a very kissy dog.

Remember when Rita took it upon herself to customize her own bedding? (In a nutshell, she purloined a no-longer-needed twin mattress topper that I didn't know where to store and "customized" it to fit her fuzzy little form.) 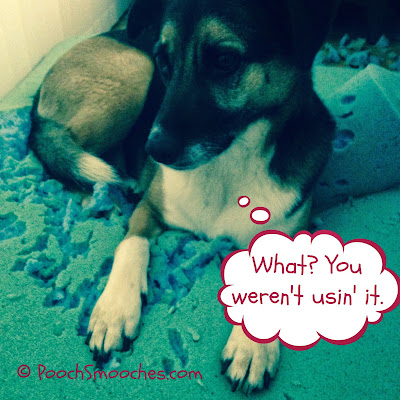 Less Wordy Wed: The Dog Doesn't Want To Be A Bother

Usually Rita sleeps later than I do and I'm up before her, but the other morning I came around the corner and here she was, waiting patiently by the backdoor to go out: 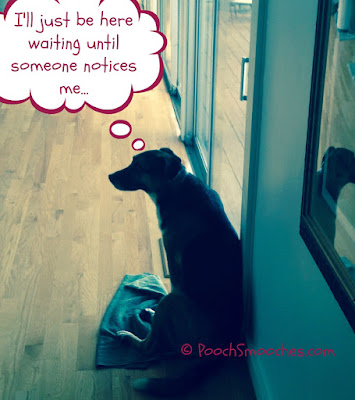 This is what she does when she wants to go in or out. She waits.

The hubs and I both like to lie on the floor when we watch TV. (Yes, we are a little weird. But we stretch, and do tennis ball massage therapy*, etc.)

Usually while we're on the floor, our spoiled pup is on the sofa or in her comfy memory foam bed. But sometimes she'll come and hang out on the floor with us. Like the other day when I looked up and saw that she and the hubs were hanging out together. 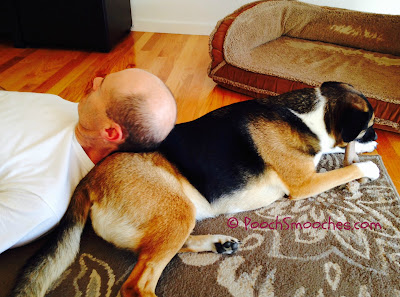 An Experiment Goes As Expected

Last week, Jodi at Heart Like a Dog, who frequently writes cute posts about the funny or sweet things her dogs do that make her smile, wrote about how her boy Sampson stops eating his Kong and stares at it, "knowing someone will help [him] get the goodies out..."

She said that he will "either bounce the Kong until he gets the pineapple out, or he just stops all together. "

I commented that "Rita would look at me like I was insane if I put fruit in her Kong." Jodi asked if I'd ever tried pineapple, conjecturing that Rita might actually like it. I said I was "100% certain Rita will give me a look of disgust if I offer her a piece of pineapple." And an experiment was born. 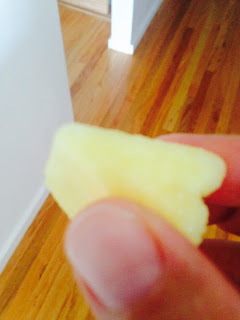 A Pet Pit-Stop at the Airport

Recently I shared pics of our trip to Hawaii. There were a couple I didn't share though.

While we were at the San Diego airport waiting for our flight, the hubs and I stopped to use the restrooms. Between the men's and women's bathrooms, this sign hung on the wall next to a closed door: 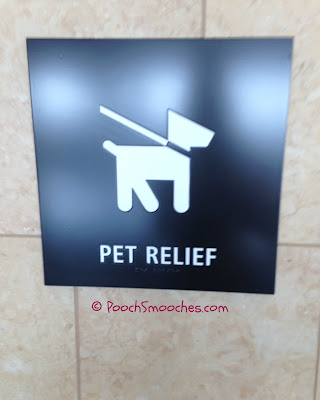 Mischief at the Office

Friday, June 26 is Take Your Dog to Work Day.

Luckily, I've been working from home since 2000. For a long time I worked as a research analyst, and now as a writer. Our girls - angel Bailey, angel Abby, and Rita - have all enjoyed getting to "go to work" with me every day, even if my commute is just to the office down the hall.

We did try taking Bailey to the dog-daddy's work a couple of times -- but only on the weekends when very few other folks were around.

Good thing too, because the very first time we took her there (the hubs just needed to quickly stop by the office for some files), she sensed immediately that this was some sort of enchanted land. As soon as we opened the door, she took off running. We had her off-leash, assuming she'd just cruise along with us - but no. She had other plans!

The Shortest Path To Treats

With our 2 previous dogs, they never wanted their walks to end. Bailey would dawdle along, sniffing and exploring for ages if'd you let her. Abby, who we used to always take to the bay, would dance out into the water just out of reach when it was time to get in the car and go home.
So with Rita, I taught her that getting home from a walk was a good thing by giving her a treat when we get home.

And now of course she wants to race home!

Monday Mischief: "I am NOT a Rabbit!"

Did you know that Saturday, Nov. 1 was "National Cook for Your Pets Day"?! (That "for" is really important in that title...) I didn't realize it until I flipped our PetPlan calendar over to November - which I did a day late.

But even though I didn't know it was NCfYP Day, I did recently start cooking for Rita. She's always eaten a good quality, grain-free kibble, with some organic canned food of one type or another mixed in. Pretty much no matter what I buy, and no matter how much she loves it on day one, but day 3 she's bored of it. Plus I got tired of always having to pick up cans of stuff for her, so I started cooking for her, and stirring this mix of organic meat, root veggies and green veggies in with her kibble.

And she loves it. 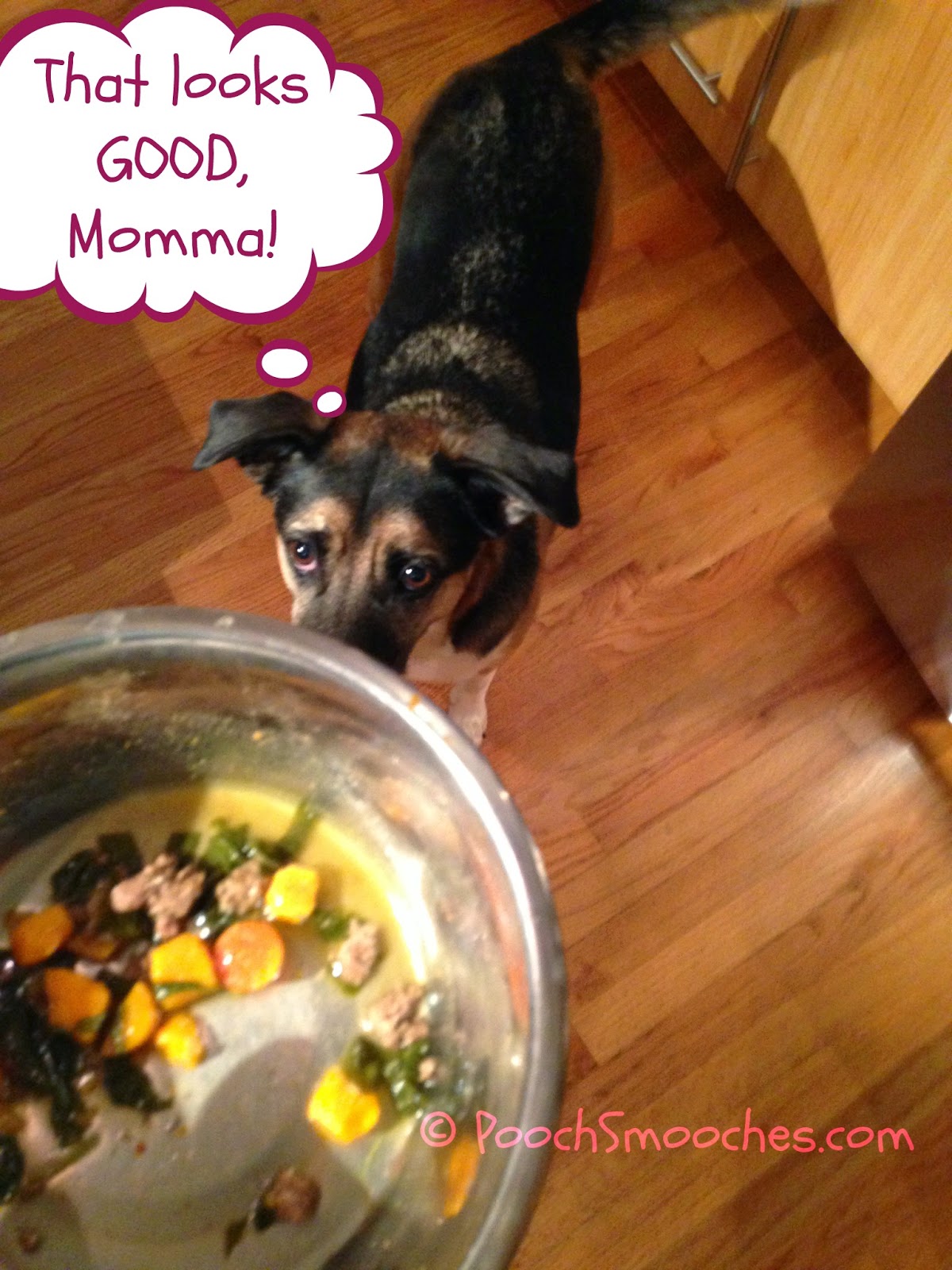 Is She Gonna Make Us An Offer We Can't Refuse?

Remember when we gave Rita a pony for her birthday? 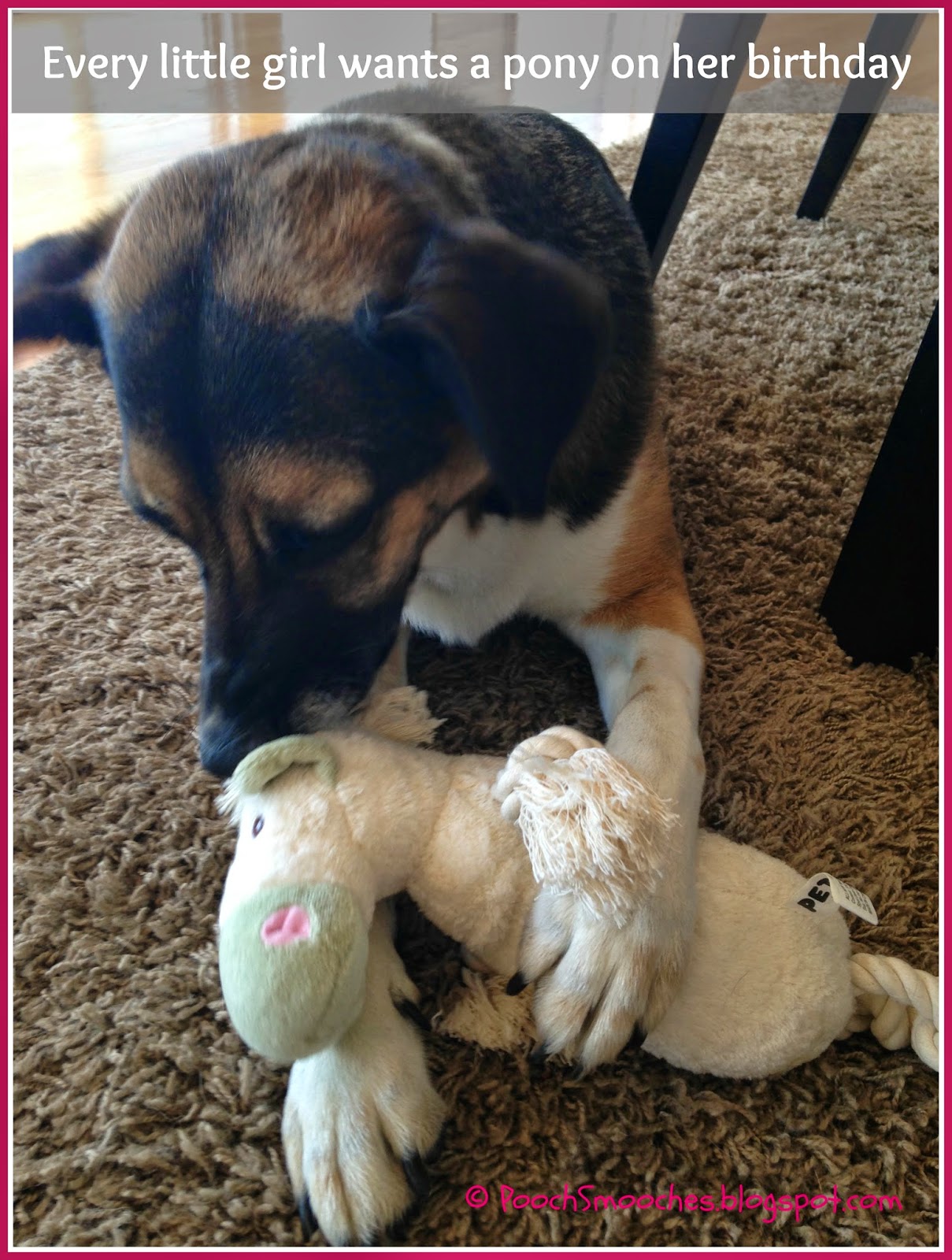 Less Wordy Wed.: Can You Guess What This Is?

Today we have a guessing game. Can you guess what this is? 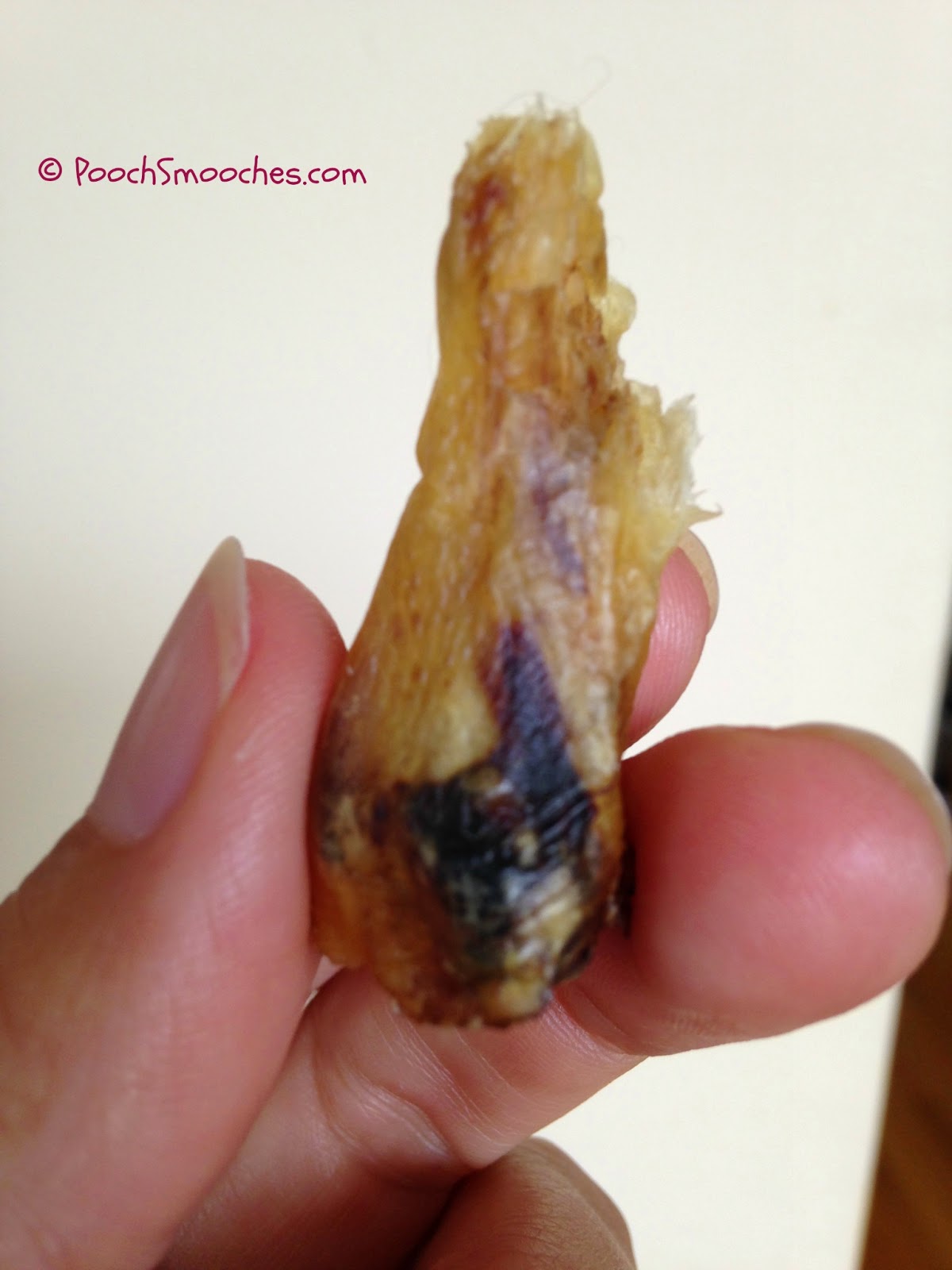 Mirth Watch Thursday: Connected (to the Dog) But Alone

Recently the hubs and I were watching something on TV where they were interviewing Sherry Turkle about her book Alone Together and her TED talk "Connected, But Alone." Turkle is a psychologist and sociologist who talks about how our connection to each other online and via our devices is shaping how we relate and communicate with one another in person.

It got me thinking about Rita, and how when I'm connected to her (out on a leash walk) I often still feel alone...

After all, she's obsessed with checking her pee-mail.

Hi everypawdy. Rita here. I have a bone to pick with the authors, illustrators, screen writers, directors, claymation-ers and muppeteers of this here world!

I want to know - where are the bitches that a little girl-pup like myself can look up to?

Sleeping with the Furry Kids
I got an email from my sister this morning, saying that her back was hurting, from her bed and "from having a dog invade my space. She is so twitchy in her sleep that I'm practically on the edge of the bed trying to keep away from her. What's wrong with this picture?"

It got me thinking about this picture that I'd seen all over Facebook lately:
[Photo from: http://9laughs.com/sleeping-with-pets-expectations-vs-reality/]


I think those of us who let our dogs sleep in the bed start out thinking, "Won't this be nice!? Won't it be cozy!" But the reality is usually anything but.

After the last week or so, I think "gopher it!" is Rita's new motto. Let me explain. A really unfortunate number of dead gophers have appeared at Fiesta Island lately. I've lost count of how many she's found/picked up/carried around--but not of how many she's eaten. That count stands at 2 1/2 (over the course of a week).

The beagle in her can smell them at 200 paces, and she'll suddenly veer off into the bushes straight for the little buggers. She usually proudly brings them back to me. "Look, Mama! Dinner's on me tonight!" For the most part, I've been able to get her to "Leave it" (command often shrieked...) and trade her for a jerky treat (100% made in the USA!*), but today she wasn't buying what I was selling. She brings it right to me, I offer her the jerky treat in exchange, and then she wolfed it down. No amount of "Leave it" yelling or jerky treat waving would help. I tried to pry her jaws open (not easy when you are also trying to not touch the dead gopher sections that are hanging out of her mouth...like the little tiny, creepy feet...) but was unsuccessful.

In other horrifying dead gopher news, I had to stand on one (!) to keep her from eating it. I'm sure you'll be happy to hear I have no pictures of any of this madness, but I do have a depiction of what my face probably looked like when I stood on the gopher. (And, yes, it's always a Bad Hair Day at the beach.)

The beagle/former-beach-scanvenger combo is just not a good one. I'm guessing this was probably her M.O. when she lived on the beach, which makes me sad. At any rate, I guess it's a good thing she's not a kisser!

I called the vet's office and asked if I should be worry. A woman at the park said the reason there are so many DEAD gophers (Rita's definitely finding them already dead -- ex-gophers, as it were -- and not hunting them down/killing them) is because there was an exterminator at the beach protecting the Least Tern nesting area. She said they use coumadin/warfarin to "bleed out" the rats/gophers, but supposedly the dose is low enough to not hurt the dogs. The vet said to just keep an eye on her for any signs she's not feeling well, but she's been her usual spunky, constantly hungry self.

I guess the moral is that I need to start bringing higher-value treats along to the beach. The jerky is not cutting it! My friend helpfully suggested dead birds. Since I don't really want to carry a dead bird in my pocket, I might try a bully stick. She had her first one the other day (well, half of one anyway) and loved it. (If you don't know what a bully stick is, here is what is says on the package: "Ingredients - bull pizzle." Yes, bull pizzle. That kinda cracked me up. But I guess it's about the nicest way to put it!)

Two Other Quick/Amusing Bits of News


Quick news: My website is up! Go to www.jackiebouchard.com and check it out if you have a minute. My friend did the logo for me. She's so talented!

Amusing News: When you have a blog, you get stats about how many visitors you've had and how/where they came to your site from. For me, it's mostly from Tripawds or Facebook, but sometimes there's an amusing Google search that brings someone to my site. Well, today it was a search on "very dirty smooches." Yep, guess what comes up when you search that -- two pages from my blog are the first hits! Lovely. :) One was the "Our Dirty Little Secret" post I did about when we first got Rita and another was a post with a picture of a "very dirty" Rita. Guess I should try to not use the word dirty anymore. Filthy's probably no good either! Will have to go with sandy or muddy from now on!

Thanks for reading! (Or at least looking at the pictures.)

* Don't buy any treats/food for your pet with ingredients from China!!!