A fairy tale for dog lovers

“Jackie Bouchard brings humor, charm, and whimsy to this modern-day Cinderella story that has a fun, dog-tastic twist. Readers who enjoy seeing a heroine triumph over the odds and get her happily-ever-after will be delighted by Cara's journey in Stray Magic.”

- Tracie Banister, award-winning author of Mixing It Up and Twin Piques


My new book, Stray Magic, here! It's available as a paperback or ebook (for $3.99) via Amazon, Barnes & Noble, Apple, Kobo, and Smashwords. 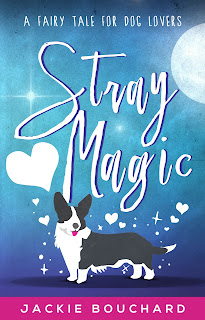 Cara Snow is newly divorced, stuck working for a jerky boss at a pet boutique, and dreading her soon-to-be-empty nest with only her beloved corgi for company. Worse still, her ex just got engaged. Doesn’t she deserve some romance, too? Or, at least a date for the Fur Ball. She’s always enjoyed the annual pet rescue gala, but this year her ex will be there with his fiancée. Meanwhile, Cara hasn’t met anyone— other than the irresistible dogs at the boutique’s adoption events.

Cara is shocked when her wish to fall for a man as easily as she does for those mutts summons Vincent. His velour track suit, paunchy belly, and tough-guy accent don't exactly fit her childhood image of a fairy godfather. Not exactly on top of his game, he admits to being twenty-five years late. (Her daughter Winnie is convinced he must be there for her!) Vincent does his best and casts a spell "guaranteed" to help Cara find the One. But when she actually starts meeting men, none of them are her type. If only they were as perfect for her as the dogs they adopt. Did her screw-up fairy godfather botch the spell? If so, what will it mean not only for Cara but Vincent as well?
From USA Today best-selling author Jackie Bouchard, comes a tale of love, laughter, and the profound magic of believing in yourself.

Excerpt:
This scene takes place at the beginning of the book. Cara is in the shower, washing off the smell of all the adoptable pups from a long day at the doggy boutique where she works. She's thinking back to the news her daughter told her earlier that day - that her ex-husband is newly engaged and planning to get remarried on Valentine's Day. Cara thinks to herself that that gives her 10 short months to find a new man for herself....

Hope you enjoyed this sample of STRAY MAGIC!