What's Better Than a Good Book?... 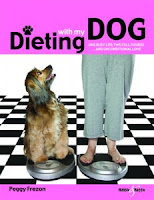 It's time to announce the winner of my giveaway of Peggy Frezon's Dieting With My Dog, and the winner is... Danielle Murgia! (Yep, that's right... If you checked Peggy's blog this morning to see who won What the Dog Ate, the same lucky lady won both books! What are the odds? But Rafflecopter is totally random, so, it's just Danielle's lucky day. Maybe she should pick up a lottery ticket today!)

I'll email you shortly, Daneille, to get your address. Congrats on the double win!

Speaking of being lucky... I won two books myself this week!

First, I left a comment on a blog and won a copy of Cat Lavoie's (isn't that a great name?) new book, Breaking the Rules. Here's the blurb from Amazon: 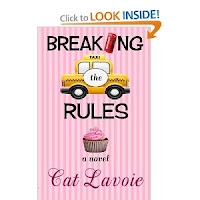 When twenty-seven year old Roxy Rule’s best friend and roommate accepts a glamorous new job overseas, she expects their relationship to continue as it’s always been—carefree and easy—until they share a heart-stopping kiss. While Ollie escapes to jolly ole England to live out his dream and save the planet with green architecture, Roxy is stuck in New York City working for a boss who makes her want to stab herself with a letter opener. She can’t bear to think about her own big-city dream of being a chef anymore. Over the years, her passion for food has only resulted in extra pounds and a staggering credit card balance for fancy kitchen equipment that she barely has time to use. Still, Roxy’s sure that nothing can come between two lifelong best friends—not even mild jealousy over a thriving career or a silly little kiss that meant nothing. In fact, it was such a meaningless and forgettable kiss that it’s not worth mentioning to her fiancé, not that he would even listen—all they do these days is argue about their upcoming wedding. Roxy is faced with an unexpected family reunion when her younger sister Steffi arrives on her doorstep, six months into a pregnancy she refuses to discuss. When older sister Izzie—in the throes of a premature midlife crisis—joins them, she’s determined to crack the case of Steffi’s impending motherhood. With the Rule sisters living under the same roof again, Roxy’s quiet little apartment in the city is about to be anything but peaceful. Roxy soon discovers that her seemingly idyllic relationship with Ollie started getting complicated way before he left for London. She must come to terms with her feelings for him, learn to stand up for herself and go after what she really wants. Breaking the Rules is the story of what happens when you have to redefine the rules of love, friendship and family in order to find yourself.

Then the next day, I found out I won a book giveaway on GoodReads! My sister has a friend, Elise Miller, that recently published a book called A Time to Cast Away Stones.

Here's the blurb from Amazon: 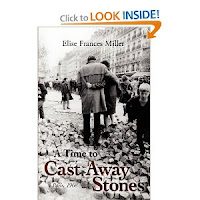 Janet Magill's brother has been shipped off to Vietnam, and Aaron Becker, her childhood sweetheart, might well be next. When Janet's parents banish her from the Berkeley protests to what they expect will be a safe, idyllic springtime in Paris, she runs headlong into the 1968 May Revolution and falls in love with a secretive Czech dissident. Far from the City of Light, Aaron makes plans to evade the draft and join her, but loses contact as her "safe" year abroad turns into a dangerous coming of age.

Seems I've been lucky too, so maybe I'll try to buy a lotto ticket today too!

Oh... if you have a coupla minutes, check out my guest blog post today at The Accidental Cowgirl. It's about writing what you know... or don't know.

OMD, I didn't mention the dog ONCE in this post. (Okay, there. I just did. I feel better now.)
Posted by Jackie Bouchard at 8:05 AM