It's Monday Mischief time again, so this week we've got a video of Rita being mischievous with another little something that we won. Yes, we won something again! We've been so lucky lately! Remember a while back I posted about the UnbreakOBall contest and encouraged folks to enter? And remember I included the link to my entry for Abby versus Barney, which Liz from the Indestructible Dog Gear blog turned into: "The Tale of Abby & Barney: A Love Story"? Well, Abby was named the "Indestructible Dog of the Month" for July (whoohoo!) so Rita received an UnbreakOBall in Abby's memory. 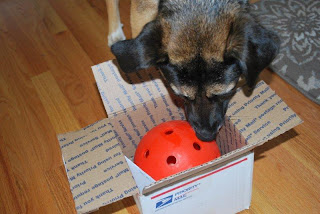 Pictures alone won't do it justice though. You have to hear the weird snorty pig noises she makes while she plays with it. I've never seen her react like this to a toy before. We only play with it for a few minutes at a time, and then I have to put it up, because she gets so worked up! It's pretty darn funny to watch.


You can still enter - maybe you'll be the winner for August! Rita says a big thanks to Liz & the folks at UnbreakOBall! (And to angel Abby for helping her little sis win a new fun toy!)

In Other Mischief News
We know a lot of mischief makers around here - they generally go by the term Monkeydogs or Monkeybutts. If you've been around the blog a while, you know that Monkeybutts (aka Monkeybutt Bunnies) usually have lived with a 3 legged sibling (causing them to act out to try to get their share of their pawrents' attention) or they may have come to live in a house that used to have a Tripawd, like our house, with our Monkeybutt Bunny Rita. (Sometimes I think she probably gets a little tired of hearing about her saintly sister, Abby!)

Anyway, the king of the Monkeybutts is Rocket - and he was our latest needle felting creation recently. I figured it was appropriate to share some pics of him on Monday Mischief.

Here he is, as his usual Monkeybutt Bunny Vampire Pirate self... 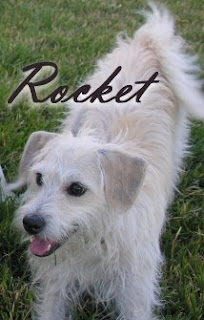 And here he is as his in his mini woolen version.

I think that's plenty of mischief for one Monday from this little corner of the blog-o-shpere. Be sure to check out the blog hop for lots more mischief from other pups!

And... don't forget to enter the giveaway for a copy of Dieting With My Dog! It's easy - just leave a comment and enter using Rafflecopter. You have until this Thursday at midnight to enter!

Posted by Jackie Bouchard at 12:24 PM