Bit of a crazy weekend, but we managed to record a video of Abby running (posted at the end). I recommend listening to it with the sound off, so you don't have to hear my screechy voice. She's running up hill and has Mike as an anchor, so it's not exactly at lightening speed, but still, it's pretty impressive for a recently tripawded pup! We saw some neighbors right after and they called her the "miracle dog." She ate up all the attention. 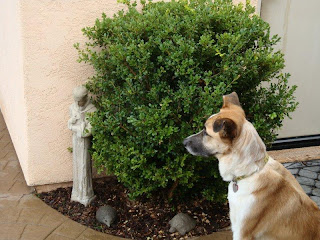 Saturday we went to a little party to hang out and watch hockey. (Mike was excited because we got to watch Hockey Night in Canada - Habs vs. Leafs! And to top it off, his team, Montreal of course, won.) Anyway, while we were gone, Abby went to her aunt and uncle's to hang out. Here she is telling her troubles to the St. Francis in their yard.
On Sunday morning, we put an offer down on a house. Early that afternoon our realtor called and said we should write a nice letter to the owners, so we included how it would be so nice for our recently amputated dog to have a single story home. Hopefully they are dog lovers and not the sort of folks who think people like us are nuts! We'll see. They have until 5 today to counter or accept so we'll see what happens.
And here it is, the requested running video:
Posted by Jackie Bouchard at 11:05 AM