Tomorrow we go for Abby's second round of chemo. The oncologist said it should go pretty much the same as the last time, although there's potential for her to be sick to her stomach just depending on if she eats something different that doesn't agree with her.
Last time you'll recall we had to play "What will the dog eat?" so I assume we'll be doing the same again starting tomorrow, although hopefully this time we'll have a better idea of what might appeal. Definitely going to have some plain pasta on hand, since that was a hit on day-two-post chemo last time.
Not too much new with Abby today. We walked up to visit our friend Mazli this afternoon, which I'm guessing is about 3/4 of a mile. Not bad for hopping. I really didn't think she'd be able to go that far already, but it was no problem. In fact, she had a little too much energy leftover when we got there and was bouncing around, chewing on her leash and attempting to chew on Mazli. We ran a little bit of the way home to really wear her out. (Of course, since I forgot my camera at Jim's on Thanksgiving, I still don't have a picture of Mazli to share. Soon!) 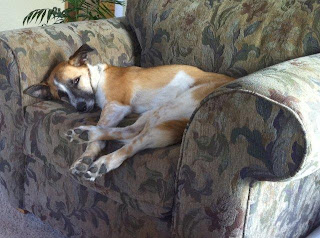 Yesterday we took her to Fiesta Island for her second visit and she had a great time. I wish I'd taken my Nano to get some more video. She played with this little terrier, and they were both racing up and down the bluff. Abby was running so fast, I thought she'd come somersaulting down the hill, but she was amazingly agile. The terrier's owner couldn't believe how Abby darted and raced around. Even Mike and I were impressed! Next time, I'll try to remember the Nano! 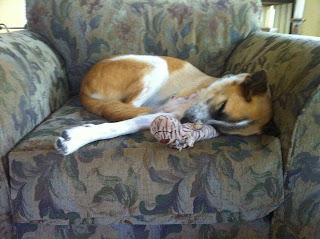 I've included a couple of pictures of her, crashed in the Big Comfy Chair after Fiesta Island. In the second one, she is sleeping with her Long Skinny Tiger toy that her Aunt Jean sent for her. Thanks Aunt Jean!

Doesn't she look sweet??
Hope everyone had a great Thanksgiving!
Posted by Jackie Bouchard at 6:30 PM