Abby went for her first "real" walk yesterday as a tripawd. It was funny to see how few people in the neighborhood even noticed. I did see some ladies in a car slow way down for their drive-by, looking at her and making that "Awwww" face. They waved and smiled at me, but I have no idea who they were.
Then we saw one of Abby's neighborhood boyfriends coming along--Donovan. He's a Shepard mix and the same age as Abby. I just stopped to wait for his "mom" to notice. It took her a while, but when she did, she put her hand up to her heart, and said, "Oh no! What happened!?" It was a similar scene as with my hairdresser the other day - she threatened to start crying. But Abby had a huge smile on her face and was waving her tail back and forth, so I just said, "Yeah, but look how happy she is."
This morning we went for another short walk with Abby's Aunt Terry and her cousin, Corgi Lou. (And Terry gets photo credits for today. I forgot to bring my camera along!) 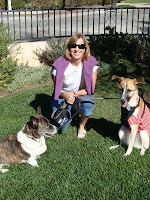 A nice lady in their neighborhood gave them treats on our walk (which I guess is her usual M.O). She gave Abby an extra one for her troubles. (And so it begins - the milking it!) Lou, on the other, didn't cut Abby any slack--he showed her some teeth when she tried to give him a few too many kisses. She LOVES him and he tolerates her.
We went to Terry's to borrow a ramp from her neighbor. Here's Abby test-driving it for the first time. I managed to get her to come down it when we got home as well, although it took a lot of coaxing with a jerkey treat. It will be great if she can get used to it--don't want her to hurt herself jumping down! We also need to try it in our bedroom or maybe add some stairs for the bed. (Or... we need to train her to not sleep in our bed... That sounds a lot like tough love though, and, as I've mentioned, we-ESPECIALLY Mike-are not so good at that.) 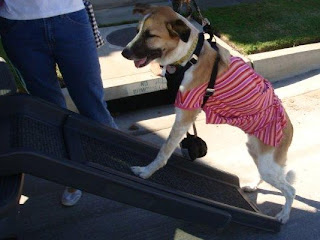 As you can see, she's still wearing a T-shirt. Mostly to keep her from scaring folks (although she's healing up nicely) and to keep her from bugging the incision.Yesterday she almost chewed off the tank top I had on her, because she wants at those scabs so badly! So, for the most part, she is still wearing the dreaded e-collar. I took a video of her illustrating the whole "need for a cone" situation, but Mike said not to post it as it doesn't paint her in the nicest light. You should see her show me her teeth when I put the cone on her! Cujo-puppy! So suddenly Mr. We Need To Show People Every Part of This is all "no, let's not show the nitty-gritty and put the puppy in a bad light." (I think it's understandable though - I'd be a might testy too if someone: took my arm; wouldn't let me go out and have fun for weeks on end; and then kept stuffing my head through a life preserver! Oh, yeah, I'd be showing some teeth!)
If there's demand for the video, I'll post it. I find it amusing.
Oh, and btw, no side effects so far from yesterday's chemo - although I guess it can take a few days. Wish us luck with that!

Posted by Jackie Bouchard at 11:25 AM