As I mentioned in yesterday's post, we went out last night to a fundraiser at The Farm House restaurant. The charity is called "World Bicycle Relief" and last night they were specifically raising money to give bikes to kids, especially girls, in Africa so they can get to school. (I think that is kind of a funny name for the group - sort of sounds like they are trying to relieve the world of the scourge of bicycles.) Anyway, it was a fun night and lots of nice people. There was only room for 40 but even in that small group there was an interesting mix of folks--or at least a mix of ages, from probably 20s to 80s. The food was incredible: lobster tortellini starter, delicious butternut squash soup, truffle-crusted black cod on a bed of pumpkin and chestnut risotto (to die for), and beef cheeks for the main course. We had never eaten beef cheeks before. Mike asked which cheeks they were... Wherever they came from they were darn tasty - a lot like short ribs. Then there was a cheese course with these heavenly bits of cheese; one of them was baked into this little cloud of pastry. Yum! Then for dessert, a little cake made with stout ale and served with maple ice cream and candied bacon. I love this restaurant. They candy bacon. So yummy with the maple ice cream! AND we each got a little box of homemade chocolates to bring home.


And here's the horror part: I FORGOT to bring my box of chocolates when we left!!! I didn't realize it until we'd driven away. What the heck???? I blame it on the lack of sleep for two weeks running. Anyway, my hubby says he will share his box with me. He is a good hubby.


For most of dinner we were seated with this very nice couple who are also dog people and who like to travel, so we had a good chat with them. Then halfway through the meal, Mike's acupuncturist - who was seated next to Chris Horner (top 10 (!) in this year's Tour de France and teammate of Lance Armstrong) - came over and said he and his wife would change seats with us so we could talk to Chris. We were a little shy to do it, but switched with them - and Chris was super nice and easy to talk to. It was fun to get some inside stories about this year's Tour, especially Stage 2 which was so rainy and slippery that guys were crashing everywhere. Chris said he was actually passed by two riderless bicycles at one point!

Anyway, it was a very fun night - and just so nice to get dressed up and go out. I realized while I was getting ready that I hadn't gone out for a fun reason since we found out about Abby's cancer. My sister, Terry, came and stayed with Abby until bed time (bed time for both Abby and Terry that is...), so it was nice to go out and not worry about the pooch being home alone. And Abby was also only too happy for a little change of pace. She's clearly sick of hanging out around here with me, as evidenced by the disgusting display of over-the-top kissing and tail wagging that went on when Terry arrived! 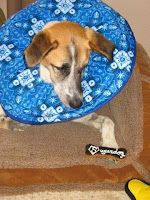 Also yesterday, my other sis, Kath, came by to visit Abby. Again, Kath got way more kisses than Mike or I have been getting lately. Kath brought Abby some cookies, like this one that says "Superdog," which were a big hit. (And kinda tasty, I might add...)
Some of you asked how Abby's getting around, so here is a very short video of her. The oncologist said the getting around part would be easy for her, but the hardest thing for her would be re-learning how to sit and lie down, so in the video: she hops! She sits! She lays down! (Riveting stuff... I should really get this up on YouTube so it can go viral.)

Posted by Jackie Bouchard at 1:27 PM