It's time again for Blog the Change for Animals! 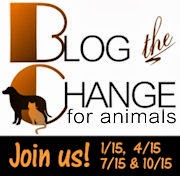 I think I've mentioned before that we got Rita from Baja Animal Sanctuary.
If you've ever traveled in Mexico, you know homeless dogs sometimes have it pretty bad down there. That's why BAS is so important!

BAS is located in Rosarito, about 20 miles south of the border. In 2012 the shelter took in almost 500 dogs and over 50 cats; and they placed 276 dogs and 49 cats in their furever homes! They are the only no-kill shelter in northern Mexico.

Here's what they have to say about BAS got started:
"The sanctuary was founded by Sunny Benedict, a native New Yorker who was working in Real Estate in Rosarito. From her office window, Sunny would see the local animals, mangy and starving roaming the streets in search of anyone who might toss them a morsel of food, or give them a kind pat on the head. She knew she had to do something. With a mere $180.00 she gathered from friends, she turned her dream into reality and started the Baja Animal Sanctuary."

I wanted to highlight BAS not just because we got our sweet girl there, and because they're doing great work, but also because they have a policy that I think is pretty cool: when we adopted Rita, we took her home as fosters.

After two weeks, someone from BAS came to our house to make sure Rita was happy and we were happy (we all were!), and that's when we signed the adoption papers. I know that's probably not realistic for a lot of shelters as it requires more time and effort, but I'd be interested to see what the BAS return rate is versus other shelters. I think it's great that families have 2 weeks to see if their new furry friend is going to fit well and become a full-fledged family member.

There was never any doubt in my mind that Rita was going to be our girl, but sometimes folks don't realize they haven't made the best pick (maybe choosing a dog based on its looks rather than personality/energy level), and in that case I think it's great that BAS makes it easy for the pup to come back to the shelter where they'll be safe and cared for until the perfect home is found.

Posted by Jackie Bouchard at 9:32 PM