Walking the Plank - Not To Be Confused with Planking

It's Mirth Watch Thursday, and today we learn about planking, as opposed to walking the plank.

If you've been around the blog the last couple of months, you know we've been going through a backyard reno project. We've had a fair amount of rain for San Diego lately, so we keep losing days of work here and there and the project seems like it's never going to end. At the same time, the deck we're having built continues to just be a framework that gets sturdier and sturdier. (I swear this deck is going to outlast any apocalypse! It will be the cockroaches, the stashes of uneaten Twinkies, and our deck.)

Anyway, I think it's been weeks now that we've been "walking the plank" to access our backyard from our sliding glass door, as Rita demonstrates in these photos:

Now, as I mentioned above, this is not the same as planking. You've heard of planking, yes? It's this super silly fad (which is actually now technically dead, so if this is the first you've heard of it, you'll be happy to know that it's already come and gone and you didn't really miss anything) where folks lay face down - usually in a strange location - with their arms at the sides of the body, and they have a friend take a photo.

According to Wikipedia (pretty sure I won't find Planking on Encyclopedia Britannica - yep, a quick search turns up 10 inaccurate hits, the first one being about ship building. Thank heaven for Wikipedia, right?), the "lying down game" as it's alternatively called is also know as "extreme lying down" in Australia. Those Aussies - they crack me up. Spinoffs include: Teapotting (picture the "I'm a Little Teapot" pose), Batmanning, and, of course, Tebowing (which I believe is now banned in 7 states).

Of course this got me wondering about dogs and planking, so I give you this: 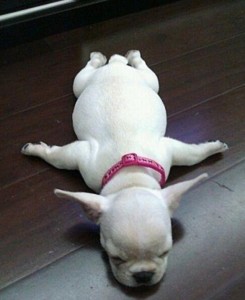 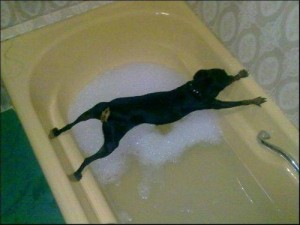 And this:
And you should also ponder this:

And last, but not least, a video of how to teach your dog to "plank" (aka, simply the "Down" command at our house, but still it's an amusing video from a dog trainer in LA):


I would post a pic of Rita planking, but she doesn't really do it right. This is as close as I can get, Abby planking with her food bowl:

Oh, and if you haven't already seen this (which I posted a bunch of other places...) I got interviewed about my writing, my pups and my novel at Petside.com yesterday! Check it out if you have a minute. Thanks!

Posted by Jackie Bouchard at 7:01 AM