Recently a quorum of my sisters (a bunch were there but not all... I have many) and I went to see the Soulful Animals: Animal Mummies in Ancient Egypt exhibit at the Bowers Museum in Orange County, CA. It was fascinating! I wanted to share some of the history and some pics I took at the exhibit. (Pics were allowed as long as you didn't use a flash.)

The exhibit was based on some of the millions of animal mummies found at 31 cemeteries throughout Egypt.
According to the exhibit, there were various reasons an animal might be mummified:

To me, the really fascinating thing about that is that it shows the Egyptians thought animals had souls. Meanwhile, the exhibit said the "Hebrew, Greek, Roman and early Christian writings condemned and ridiculed the Egyptian view of animals." Pfffhtthh to that. (I'm so scholarly...)
The exhibit said animals that represented certain gods (for example, crocodiles represented the god Sobek, a god of the Nile who brought fertility to the land) would be raised by priests in and around temples built for the gods. Then folks would come along, buy a crocodile mummy and offer up their message for the gods. In the case of the crocs, it said they would, er, dispatch the crocs when they were little, since it's obviously a lot easier to deal with the babies and mummify them over the full-grown variety.

Some of the mummies were also in wooden or bronze coffins, like this shrew coffin. (Isn't it cool?) Probably the richer you were, the more elaborate thing you would buy - cuz you wanted to make sure your message got received!
There were also a couple of wooden cat coffins, one with gold still visible, showing that cats were “prized at all social levels in ancient Egypt.” Cats were buried in human cemeteries as far back as 4000-3000 BCE, suggesting “cats were domesticated from very early times.” The exhibit said the DNA of the mummified cats traces to today's domesticated house cat. (Of course it does, since cats KNOW they are still prized today.)


The animals that were mummified were all ones that had a relationship with one or more deities, such as dogs and the god Anubis, the jackal-headed god of the underworld who guided and protected the spirits of the dead.

The mummies were believed to act as messengers from the Egyptians to the gods, and they would pray for pretty much the same things folks do today... long life, better health, better working conditions, etc.
This next item was one of my favorite things (after that intricately folded dog mummy above...) It's a “stela” (a "commemorative inscription or relief design, often serving as a gravestone") from the tomb of an Egyptian official and his wife. The married couples son had it made for them, and they are shown with the image of their pet dog under their chair. (He's a cutie!) According to the exhibit, this was a more common way of memorializing the family pet than mummification. 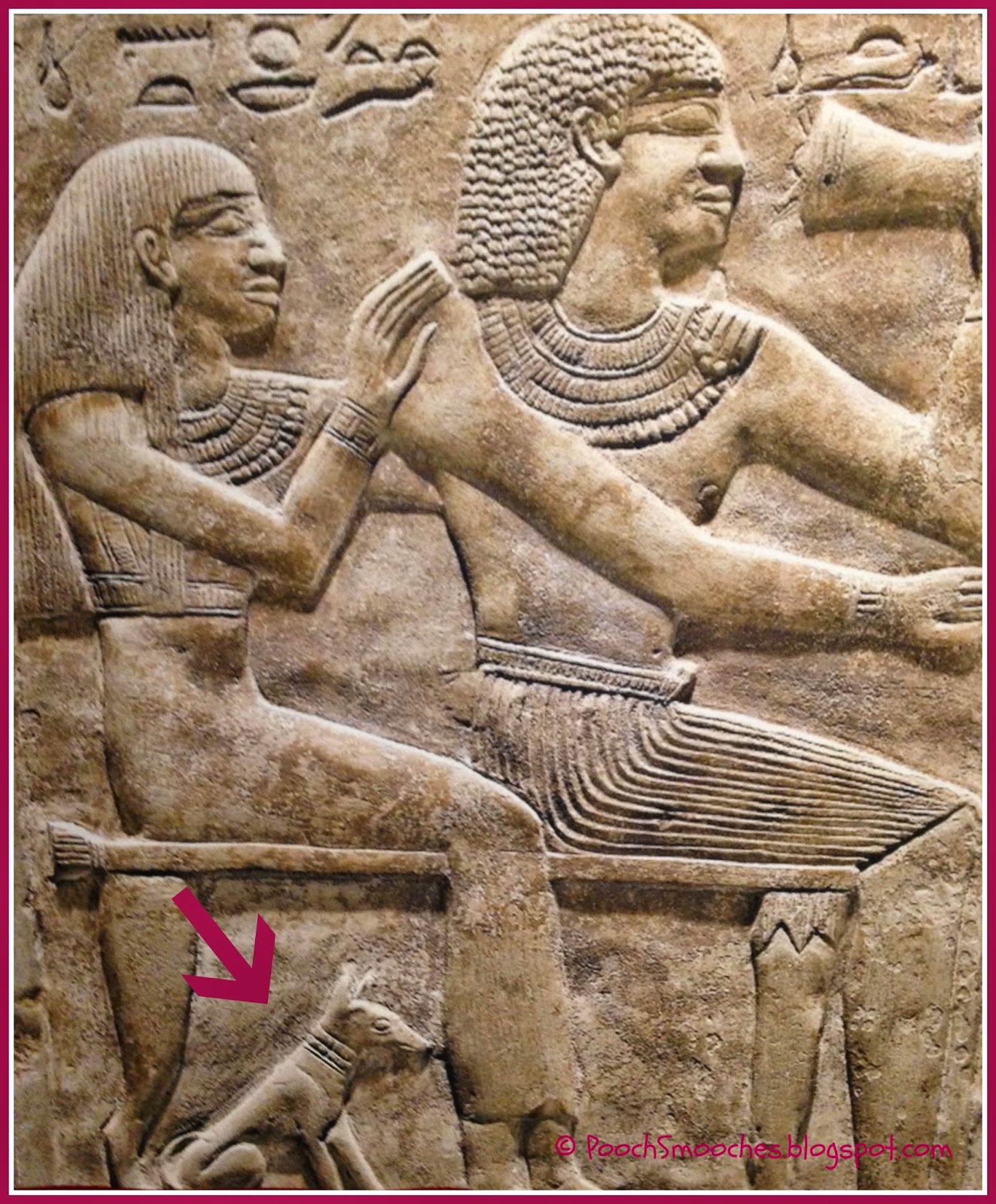 A married couple with their pet dog

Yeah, I think I'd rather have the family pet memorialized with an engraving, rather than as a mummy.

But, hey - those ancient Egyptians weren't so different from us. They loved their cats and their dogs. (Look at the fancy little collar the dog in that stela is wearing!)

Thanks to BlogPaws for hosting Wordless Wednesday. Sorry I was so wordy, but I thought it was a super interesting exhibit!

Posted by Jackie Bouchard at 9:46 PM