Monday Mischief: We Do Have SOME Rules Here at The Spa

Things are pretty easy for spoiled pups who live here at our spa. They can get up on the sofa, sleep on the bed (although Rita mostly chooses not to), lick the plates before they go in the dishwasher (again, Rita doesn't always want to, because she's weird...), etc.

But we do have a few rules, and one of them is hard and fast: No sticks in the house!

Our last pup, Abby, (who was FULL of mischief) often flagrantly attempted to violate this rule:
But Rita (except for her reactivity issues on walks and with strangers in the house) has been good as gold. 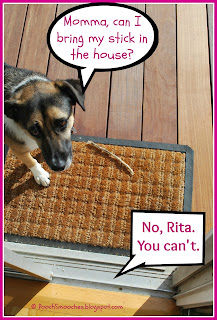 I thought that would be the end of it, but then she must have started channeling her angel big sister, because later I found her like this: 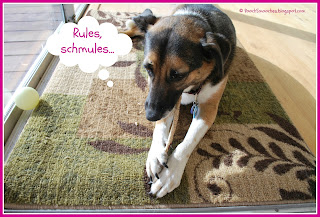 Does your dog ever flauntingly breaking the rules at your house?

In Other News...
I'm going to be guest blogging Monday at my author-gal-pal Tracie Banister's blog. Tracie is celebrating the one year anniversary of her novel, In Need of Therapy. The main character is from a fun and nutty Cuban family, so Tracie is celebrating by having guest bloggers post family recipes. Stop by and read about one of my fave comfort-food recipes from my mom. It's easy to make! (Turns out, most of my mom's recipes are... but you can read about that on Tracie's blog.) While you're there, you can enter to win a Cuban cookbook!

Thank you to Snoopy’s Dog Blog, Alfie’s Blog, and My Brown Newfies for hosting Monday Mischief!

Posted by Jackie Bouchard at 9:56 PM