I know I mostly only post about how cute and sweet Rita is (and how she hardly ever gets into any mischief, leaving me scrambling for ideas for Monday Mischief posts) but she does have some ... issues. Because of her issues, we started working with a trainer.
As I've mentioned before, Rita is a rescue, found on the beach in Baja. We have no way of knowing if anyone hit her, but at a minimum she was probably at least scared by someone brandishing something threatening. (She's afraid of, and barks at, anyone with anything that could be a weapon - gardeners with tools, men with pool skimmers, old ladies with canes, etc. She's gotten much better about the canes, but still hates gardeners!)

She also was bit by her foster mom's dog. (The foster mom told me, and Rita has a scar above her eye to prove it.) We've also been charged at by a snarling, scary off-leash dog, so Rita can be reactive to other dogs when she's on-leash (although she's mostly fine off-leash, running up to other dogs happily to say hello).
I've been working with her when we go on walks and when strangers come by, and in some ways she's a lot better, but in other ways she's getting worse (e.g. she's suddenly started lunging at noisy trucks or motorbikes on our walks, which she never did before). So, we hired a trainer.

We'll do some private lessons and then maybe take a class as well. Our homework after the first session was to avoid anything that triggers her on walks.

This is NOT easy! She has so many triggers! And there are so many houses in our 'hood with construction crews or gardeners, not to mention all the other folks out walking their dogs. If we see something ahead, we are supposed to duck down a side street or turn around and go the other way.

To give you a taste of how these walks are going, I diagrammed a small portion of yesterday's walk for you: (it ended up looking like one of those old Family Circus cartoons...) 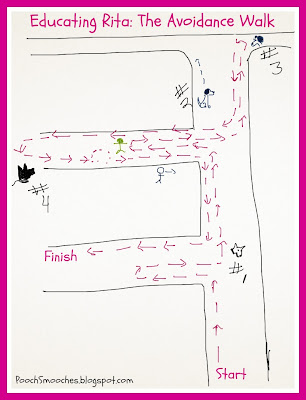 We were heading up the road when we saw dog #1 coming at us, so we ducked down a small side street while they passed. Back out on the main road, we saw dog #2 ahead. We ducked down the next side road, but there was a gardener (the little green stick figure) so quickly went back to the main road. Dog #2 turned left at the end of the road (the way I'd intended to go) so I planned to go right... until I saw dog #3 coming our way. So we turned back. We headed down the side road intending to take a different route home, but at the cross street we ran into a woman (with a big floppy hat). Rita was okay with the woman, so we kept going, but then saw dog #4.

We had to turn back down the side street, where the woman had started walking backwards (the black stick figure). Rita doesn't do well with folks who are doing things outta the norm, so we loitered a bit and then finally were able to get to the next side street and finally get to our alternate route home.

See what I mean about it not being easy?? This wasn't even at prime walkies time - this was at like 10a.m. on a Tuesday. Where were all these folks coming from??

If you ever have to take your dog on an Avoidance Walk, here are some tips:

Now, for some Mirth Watch fun... I googled "well-trained dog" and Skidboot came up right at the top of the results. You may have seen Skidboot a few years back - I think he was on Pet Star, and I know he made the rounds of all the talk shows. Here he is doing his thing:

I looked up his web site and he passed away in 2007 at the age of 15. There was a nice note from his dad on the site thanking people for their condolences. He said, "I consider Skidboot's passing a positive thing; as for him, he had no regrets in life." A good lesson - no regrets, people!

BTW... I've never seen the movie Educating Rita. I'm pretty sure it's not about dog training. But I would probably like it anyway, since I usually enjoy Michael Caine movies.

As for educating our Rita, I'm pretty sure she'll never be Skidboot reincarnated, but it would be nice if we could have people come to our house without her scaring them! And I'm hoping a nice calm walk isn't too much to hope for.