A few weeks ago, Rita and I participated in an online auction hosted by Dachsies With Moxie to raise money for the animals affected by the recent tornado in Moore, OK. Rita and I had the winning bid on a fun treat and puzzle toy combo pack, which was supplied for the auction by Bailey, Hazel and Greta of Idaho Pug Ranch. Hooray! We like to win! And, best of all, about $900 was raised for the Moore, OK animals!

Our prize package included some Zuke's Mini Treats, which Rita loves, and a puzzle toy which Rita... is confused by.
I filled it with a few Zuke's and showed her that they were in there:
She seemed to have a hard time picking up the paw puzzle pieces and gave up pretty easily. Later, I took 2 of the pieces out so it wouldn't be so hard to get all the treats out. (The treats are not only hidden under the yellow pieces, they are also in little sections in between. So the idea is, the dog pulls out all the pieces first - revealing treats under each - then spins the top to reveal the hidden compartments with more treats.)

Even with 2 pieces removed, she still didn't seem to think it was easy enough.
She tried grabbing one of the pieces, but couldn't quite get it:
She tried pawing at it:
She tried guilt-sucking me with "the look": 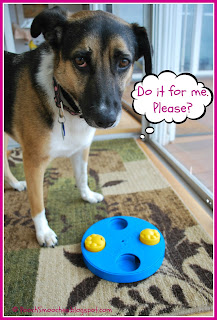 I caved. I took one more piece out.
She tried staring at it:
And she stared at it some more:
And then she gave up:
So, I felt bad for her and took the last piece out, and she quickly swiveled the top and got the rest of the treats out:
Here's the true mischief part... I put it back together with no treats inside, and she instantly walked over and plucked one of the paw shapes out! What the heck??
So, apparently she's just fine at doing the puzzle when there are no treats, but when there are treats, it's too confusing. (She did that twice - plucking the pieces out easily when the toy was empty.) Maybe the treat smells addle her brains.


In addition to her "I'll only solve the puzzle when there are no treats in it" mischief, she decided to munch on one of the pieces. (Which is odd because she almost never chews on things she shouldn't!)

I think she's trying to make them all misshapen so they won't fit back in properly!

Thanks so much to Dachsies with Moxie for organizing the auction (what a great idea, right?) and to Idaho Pug Ranch for our fun auction item!

And thank you to Snoopy’s Dog Blog, Alfie’s Blog, and My Brown Newfies for hosting Monday Mischief!

Posted by Jackie Bouchard at 8:50 PM