Last week, Peggy Frezon of Peggy's Pet Place (you remember, Peggy, right - from the Dieting With My Dog book giveaway?) tagged me for a blog feature entitled "The Next Big Thing." This weekly feature, where each author passes the torch on to five others for the following week, is about "The Next Big Thing" that writers are working on, with each author answering the same set of questions. As Peggy said, "What a great way to learn more about an author and discover some new reads." So at the end of my post, I'll tag five writers, so be sure to check them out next week. Thanks again to Peggy for tagging me!

My next book is definitely a "big thing," to me, because it's been with me, "hounding" me as it were (yes, it's another doggy-related book), for so long now. So, here goes:

What is the working title of your book?
For now I'm calling it Just Only Jane. But that will possibly change. I got the title idea from a children's book that I still have to this day called Just Only John, which I love. It's about learning to be yourself. Jane doesn't really have a problem with being herself, but she needs to learn to be the best version of herself.

Where did the idea come from for the book? 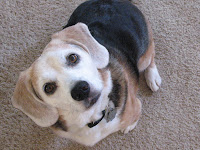 That's sort of a sad story, because I got the idea when our beloved 12-year-old beagle, Bailey, died fairly suddenly of cancer. I started thinking about this character whose husband and dog both recently died... only she's sadder about the dog. Bailey becomes "Barnum" in the book, and he is already gone when the book opens. Writing about Jane dealing with Barnum's death helped me deal with Bailey's. But I had to try to make parts of it funny - hence the fact that she's sadder about the dog (because she was going to ask the husband for a divorce anyway, but no one knows that) - in order to deal with it. If you haven't noticed by now on this blog - I deal with things through humor!


What genre does your book fall under?
That's a toughy. It's not as much of a romantic comedy as What the Dog Ate is. It's still funny, but there are also sad parts. (I wanted it to be like life!) I'd probably just call it "Commercial Women's Fiction" - but that's such an unwieldy mouthful. Hopefully it's a story that anyone who has ever felt alone, or ever lost a beloved dog, can relate to.

Which actors would you choose to play your characters in a movie rendition?
That's another toughy! Jane considers herself to be very plain. (She jokes to a friend when her mother comes after Jane with her flatiron that she looks like "Tom Petty, only without the facial hair.") There's no such thing as a plain actress, is there? Except for character actors, I suppose. There's probably a great character actor out there who would be perfect for the part, but none of us would know her name.

What is the one-sentence synopsis of your book?
It's the story of how an amazing dog living with cancer changes the life of a loner.

Will your book be self-published or represented by an agency?
I'll send it to my agent when it's done, and see what she thinks. It may not fit nicely and neatly enough into one of the genre boxes for a publisher to want to take it on, in which case I can always self-pub it.

How long did it take you to write the first draft of your manuscript?
The first really really rough draft basically took 1 month. But, good grief, that was three long years ago! Bailey passed away in mid-October, and I started the book in November, during NaNoWriMo - National Novel Writing Month. Every November, a bunch of crazy determined writers get together online to encourage each other while they each crank out a 50,000 word novel (which is roughly writing 6 pages/day). Most novels are about 90-100,000 words, so 50,000 words is not exactly a full manuscript, but it gives you something to work from. I got my 50K words done in Nov '09, but the story has changed a lot since then -- mainly with the addition of the three legged dog character, named Maybe, who is based on Abby. I took some huge breaks away from the book, like when we lost Abby in January. I really didn't feel like working on it anymore. It took me until just recently to get back at it.

What other books would you compare this story to within your genre?
I can't really think of another book that's like this one. Most similar books start with the puppy, go through how the dog's life affects the owner, and then at the end the you're grabbing for tissues because the dog is either dead or about to die. Well, this book is different in that it starts with a dead dog! You get your tears over with in the beginning, and then move on to the happier, more hopeful stuff. :)

Who or What inspired you to write this book?
You've probably guessed the answer to this one by now - my dogs! First Bailey who was so funny and such a big part of our lives for 12 years, and then Abby, who was amazing and inspirational in the face of her 15 month fight with bone cancer.

What else about your book might pique the reader’s interest?
A three-legged dog isn't enough? Ok, well, it also includes dropping Jane, a loner who thinks most other people are annoying, into a B&B/service industry job. She ends up working there between jobs to help out her uncle and aunt, but it's most definitely not where she wants to be. I thought that might be amusing, since B&B's seem to always be owned and operated by folks who are "people" persons. Jane is not a people-person. So there are some (hopefully) funny scenes where she has to deal with "the public." One other fun little inside thing is that I've worked all of my families' pets' names into the book - but almost all of them as human characters.

So, that's me. Next week it will be time for another group of fun and fabulous writers!

Four Fabulous Friends
Okay - I know I said above that I'm supposed to "pass the torch" to 5 more authors, but I realized that some of my author friends don't blog, and another one I asked didn't have a "next thing" done enough to where she could answer all the questions above, and another I asked didn't get back to me. So, if that last gal does get back to me soon, I'll update this and add her in. Otherwise, we're just going with my four fab friends here:

Samantha Stroh Bailey: visit Sam at samanthastrohbailey.blogspot.ca next week to hear about her upcoming women's fiction novel. I met Sam through GoodReads and recently read her first novel, Finding Lucas, on the plane to Maui. It was great entertainment for me during my flight!

Cat Lavoie: (isn't that a great name?), visit Cat at www.catenabi.com/blog to read about her next chick lit book. I'm currently reading Cat's first novel, Breaking the Rules, which I won (yay me and my lucky streak! Rita's not the only one winning stuff around here!) and am really enjoying it so I thought it would be fun to tag Cat for next week.

Isabella Louise Anderson: I recently "met" Isabella through the Chick Lit Goddesses group she started on Facebook. It's a great group and so good to be a goddess, so I wanted to include her and officially thank her for running such a great and supportive group. So check out www.chicklitgoddess.com next week for news on Isabella's chick lit novel.

Carol Bryant: Now for a little non-fiction. Carol runs the fabulous Fidose of Reality dog blog. A couple of months ago, I noted here that Carol gave What the Dog Ate a fabulous review. I remembered that in it she mentioned working on a book of her own, so I thought it would be fun to hear more about it. Check out Fidose of Reality next week for news on the book, which is a "reference and resource for anyone who has had, will have, or wants a dog."


Thanks again to Peggy for picking me. You can go back and see Peggy's original post here and read about the children's book she's working on.

Posted by Jackie Bouchard at 7:47 AM