I Have Been Remiss - Part I: Awards

In the past few months Pooch Smooches has been given several awards by other lovely bloggers. I've been totally remiss in mentioning them and officially thanking them for the awards. There are various rules involved - usually answering a series of questions, and then nominating other bloggers. I added them all up, and (since I've been remiss for so long) that would mean answering 54 questions and nominating 77 different blogs. That's a lotta questions/blogs, so I'm just answering a few of the questions and generically nominating blogs in my Blog Roll to the right. (I hope I haven't left anyone off!)

I know... that's cheating. I'm usually such a rule-follower (like Maggie, the main character in What the Dog Ate), but, geez - 77 blogs is a lot!

Here are the awards in no particular order:

Reality award
I was awarded this by Brown Dog CBR blog (CBR = a Chesapeake Bay Retriever named Hawkeye, or Hawk for short). 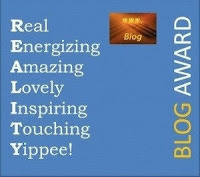 I'm supposed to answer 5 questions/nominate 20 bloggers, but I just picked this one question to answer:


This is a toughie, cuz there's all that altruistic stuff you could pick and look like a good person ("I'd end world hunger!"), but to make this fun, let's say you can't go with any of that Miss America-type-answer fodder. So, if I could change ONE thing, I would switch the nutritional value of broccoli with that of full-fat ice cream. Seriously - what if ice cream was on all those "super food"/"best cancer foods" lists!? Am I right?

THANK YOU, HAWK, FOR THE NOMINATION! It was so nice of you to select us! 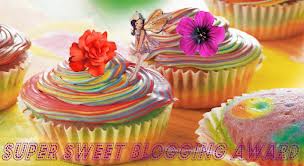 When we were nominated, Coralee & Finn wrote: What could be sweeter than pooch smooches? Though this blog began on a sad premise, it has established itself as a place of beauty, humor, and sweetness.

Awww. Thank you! Rules are to answer 5 sweets-related questions and pass the award on to a "baker's dozen" blogs. I love sweets (unfortunately!) so it was hard to pick a question, but I picked this one:


It's probably pretty easy to guess my answer, based on the above. I'll go with ice cream - mostly anything with some chocolate in it, although I also like pralines and cream ice cream. But pralines and chocolate cream - oh my.


THANKS CORALEE & FINN! It was super sweet to get this award!

Pooch Smooches was nominated for this one four times. There were a lotta rules on this one. I was supposed to post 11 random facts about myself, answer the nominating blog's 11 questions, then come up with 11 questions of my own for the 11 blogs that I nominated.

Since I got nominated 4 times, I'll do 4 random facts about me:

The first nomination for this came from my good friend, Samantha Stroh Bailey. Here are 2 questions from Sam:


There are a few, but I think I'll go with Dickens' A Christmas Carol. I love the humor in it, and you can read it every couple of Christmases and it never gets old!

I was also nominated by another good writer friend, Tracie Banister. Here are 2 questions from Tracie:


The hubs and I are (doping controversies aside) big professional cycling fans. We were just saying two days ago, that we'd love to go see a selection of the "Spring Classics", especially the ones that involve racing over cobble stones (cuz we enjoy watching the suffering). We'd love to go see: Gent-Wevelgem and the Tour of Flanders (both in Belgium) and Paris-Roubaix, aka "The Hell of the North" (in France). This would include a lot of drinking of Belgian beers, eating of Belgian chocolates and eating everything in sight in France.

Was just discussing this with the hubs recently as well. I'd like to be backup singer for Depeche Mode. (I know some would argue with me, but David Gahan is the sexiest front-man ever.) We are going to see them in September and we can't wait.

Next, I was nominated by author, Salem Patterson


The hubs' homemade pizza and, of course, ice cream for dessert. And a cocktail of some sort to go with the pizza.

Vacuuming stairs! Luckily we moved away from our carpeted-stairs home. Now we enjoy stair-free living! (So, I guess my new least fave chore is just plain ol' vacuuming.)


Finally, I was nominated by For the Love of Life - Alice's blog.


I love word games, so I'll go with Boggle. I'm always trying to get the hubs to play with me, but he usually never wants to. (I have to let him include French words when we do play.)

I fold the corner with a magazine, but hate to do that in a "real" book! I always find a book mark instead, even if it's just whatever's handy - my reading glasses, a torn piece of paper, etc.

THANK YOU SAM AND TRACIE AND SALEM AND ALICE!!

Thanks again to everyone! We are sending muchas pooch smooches your way!

Posted by Jackie Bouchard at 12:01 PM