Last night the hubs asked me what I thought Rita would do if she had opposable thumbs.** I said we'd probably need to put a lock on both the fridge and pantry doors.

What If My Dog Had Opposable Thumbs?
I decided to Google "what if dogs had opposable thumbs" just to see what would come up, and it turns out there's actually a "What if cats and dogs had opposable thumbs?" Day. It's March 3rd. Unfortunately we forgot to celebrate it this year. It's in its 22nd year! According to the man who started the "holiday," people "aren't supposed to actually do anything on March 3." (Which is good, since I forgot to send out cards and get gifts!) "It's all about contemplation of canine and feline evolution." Since we missed the official "celebration," we'll contemplate it now.

Here are the top 3 things I think Rita would do if she had opposable thumbs:
1. Open the fridge and help herself to the contents of the cheese drawer. 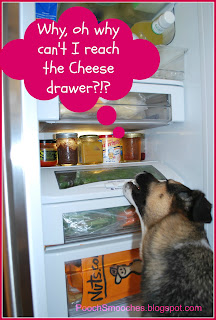 2. Go online and order all the treats she can stuff herself with. (And she'd be able to open the front door when they were delivered.)

"If you loved me, you'd give me your credit card number."

3. Take the car and head down to the beach whenever she felt like it.

Okay, I wanted to put a picture here of Rita in the driver's seat of my car, but she ALWAYS sits in the back, and no amount of treats could convince her to keep her fuzzy butt in the front. She kept leaping into the back. And nobody wants a backseat driver. (She's so funny. We had to fight with Bailey and Abby to keep them OUT of the front!)

And now... here is Jimmy, a cat who can actually do that:

As you can see, no, Jimmy does not want to do it again. And I love how he gives her the "thumbs down" when she says it's time to get up.

What would your pet do if he/she had thumbs?

** There's a little back story here... One day loooong ago, Mike and I were talking and I said it was a good thing the dog (our beagle, Bailey, at the time) didn't have opposable thumbs. The next day, I heard him talking to Bailey, and he said something to her about not having "disposable thumbs." Yeah, he gets a lotta teasing about that. (In his defense, English is not his first language - although you'd never know it to talk to him since he has no accent - but he still gets a lotta teasing about that.)
Posted by Jackie Bouchard at 8:10 AM