Rita had to go to the vet on Friday for her annual checkup. (And she was super healthy! Well... still waiting for her blood work results, but eyes, ears, heart, teeth, weight were all deemed "just great" by the vet.) Anyway, our vet's office has a sign posted with the Top 10 items ingested by pets.
It's a bit hard to see, but the top 10 items in order of popularity are: socks, underwear, pantyhose (do ladies still wear those? Maybe this is an old list.), rocks, balls, chew toys, corn cobs (yikes!), bones, hair ties, and sticks.

That's a lotta mischief your pup can get into! 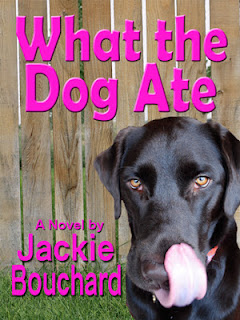 I've had this photo for a while but saved it to share today to celebrate the fact that the ebook version of What the Dog Ate is on sale through Wed, October 2 for 99 cents! You can get it via Amazon, Barnes & Noble, or via Smashwords if you have a Sony ereader or other device. (If you don't have a Kindle, you can download the Kindle App for free for either a tablet or PC and read ebooks that way.)


Since What the Dog Ate opens with a woman finding out her dog ate panties that aren't hers, I have to highlight item 2 - underwear! Our angel Abby used to like to chew on our undies (the hubs still has one pair with a hole in that he won't let me throw away because he thinks of them as a reminder of her. I'm sure the guys at the gym wonder about him... Sigh.). Luckily she never actually ate a pair!

I also want to highlight item 1 and a funny story that is similar to the opening of my book. When I was trying to find the origin of this list I came across this post which credits it as originally being from Dr. Chris Duke, a vet from Mississippi. He added the following info about dogs eating socks:


"Socks. That’s so common, it’s not surprising. Foot odor is very attractive to dogs, and socks get thrown loosely on the floor, particularly by men. I remember a time when I was at the Auburn University veterinary school when a dog had a monogrammed sock removed from its intestine. When the surgeon called the woman who owned the dog after surgery, her first question was “what are the initials?” Her second question was, “Can I come and get that sock so someone else doesn’t see it?” Yikes, don’t want to get in the middle of that one."

Hmmm... Wonder if her hubby ever found out about those initialed socks??

If you've already bought/read What the Dog Ate, thank you! (And please consider leaving a review on Amazon. Always hate to ask for those, but they are super important for indie authors like myself!) If you know some friends who have ereaders, please pass the news of the sale along to them. Thank you!

Has your dog ever swallowed an item on that top 10 list?

Posted by Jackie Bouchard at 7:40 PM