I'm busy busy busy getting down to the wire on the upcoming Monday launch of Rescue Me, Maybe, so I'm going to try to keep this Follow Up Friday post short(ish).

Yes, it's Follow Up Friday - time to answer those burning questions and follow up on the news.

I Love, I Love, I Love My Calendar Girl
Let's start with some news first... Remember when I was hitting y'all up for votes for Rita for the Dogs of Blogville calendar contest? Well, Rita made it in! Hooray! Thanks so much to everyone who voted for our girl! 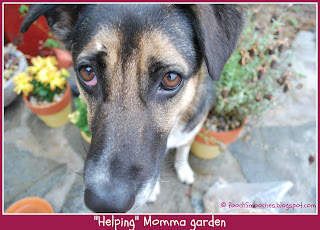 The dogs are being put in the calendar in the order of where they fell in the voting, so Rita will be Miss June. I'm glad she ended up as a spring month, since it's sort of a spring-y picture.

If you want to order calendars, go HERE. They're only $21 and proceeds go to help Benny, an adorable French bulldog who is working hard to kick some cancer bootie!

Pup Captioning
On Wordless Wednesday, I had y'all try to help caption these pups: 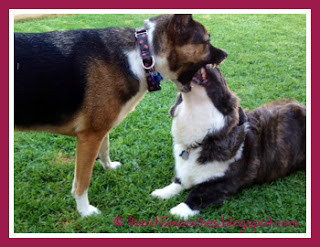 Most folks agreed that Patty's (which I included in the post) was hard to beat, but these were a couple of my faves that made me laugh:

Roxy of Roxy the Traveling Dog offered: "You have a tiny squirrel stuck back there, want me to get it?"

Vlad Barkley of ?? {Vlad - I don't know how to link to you! Hopefully you'll see this and leave your blog URL if you have one. When I link to your user profile, it takes me to your Google+ page, and I don't see how to get to a blog for you from there.} said: "If a strange Mastiff at the park ever tells you Corgis taste like chicken . . . do NOT believe him!"

Mirth Watch & Maui
On Rita's summer vacation report, Flea from Jones Natural Chews asked if the woman who was attacked by the shark was "swimming or surfing? Surely there was something else, not just swimming." Well, she was snorkeling, so basically just swimming except with a snorkel on. I know some folks snorkel rather far out around points/rocks, because that's where there are a lot of fish. I don't know if that was the case with her or not, but the hubs definitely avoided going out around the rocks/corral this year.

One thing the news said was that she was swimming at 5:00p.m., so somewhat close to dusk. The paper said not to swim at dawn or dusk as those tend to be feeding times. I don't know if that's true, but you can bet we were nowhere near the water at those times.

There was a local triathlete that was killed by a shark here in San Diego a few years ago. He was swimming really early in the morning, so maybe there is something to that dawn/dusk thing. 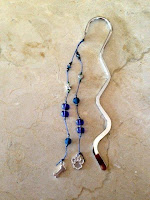 On a much lighter note - you have until Saturday at midnight if you'd like to enter my giveaway for a copy of Rescue Me, Maybe and the lovely matching doggy-themed bookmark.

Go here to enter and simply leave a comment. Winner will be announced Monday - along with the official book launch announcement!

Thank you to host Jodi from Heart Like a Dog and this week's co-host, Flea, from Jones Natural Chews!


Posted by Jackie Bouchard at 4:01 AM