Although it almost looks like she's belting out a tune here, using her Himalayan chew as a mic. She's doing her Cindi Pawper impersonation, and yes, this little girl does just wanna have fun: 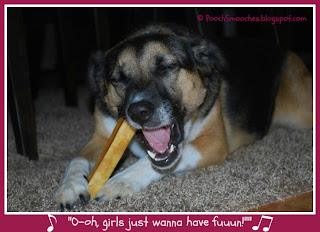 This was Rita's first Himalayan chew - which I learned is basically a really hard cheese. Sounds a little weird to me, but Rita says, "What's not to like?" Since our motto around here is "Don't be shy with the cheese," we had to get one for her to try.

Anyway, Rita's simulated karaoke session with her Himalayan chew gave me the idea of posting a singing dog video. I found this one, where the dog not only sings, it sings "I love you"! I've been trying for years to get our dogs to say "I love you, Momma." The closest I've gotten is one morning when Rita - I swear - said "Momma" when I walked in the room in the morning. (She's not much of a talker, but "says" a few things in the morning when she first gets up.)

Until she gets the "I love you" part down as well, I'll live vicariously through other I-love-you-saying/singing dogs, like Mishka here:

Am I the only one who tries to get their dogs to say (or sing) "I love you"?