It's Friday, so time for the Follow-Up Friday hop, hosted by Jodi of Heart Like a Dog and her co-host JoAnn from Sand Spring Chesapeakes. Time to answer those burning questions and follow up on the news.

An Old Photo & A New Banner - Questions Answered
Last week, on (not so) Wordless Wednesday, I introduced our new banner and tagline along with an old photo of our Bailey. Jodi, our lovely hostess for today's hop, asked, "Did I hear you say you designed [the new header] yourself?" Well, yes, but I just did the easy part myself - making the banner using the collage thingy on PicMonkey, but my sis (from GerardArt) did the paintings of all our pups.

I wish I'd discovered the batch-naming thing sooner, since I usually take tons of similar shots. Like this one below is from a series of MANY shots from July 14th when Rita slept over at Reggie's house. I told the software to name the series of pics "0714 SleepOver" and then assign suffixes starting with "_01". Easy-peasy!
I know. I can't help it. It's the librarian in me. (Seriously, I have a masters in library sciences...)

Lions, Tigers & Bears - I Enjoy Funny Comments
Last week's Mirth Watch mentioned the Lions, Tigers & Bears rescue facility here in San Diego.
Wendy of A Brave Face said, "When I think about the exotic animal problem, and look at my little unruly dog, I can't image the moment some person is like 'Ok! We're getting a Tiger! I'll take feedings, you take poop duty.'" That is so true/funny. Can you imagine the size of the bags you'd need to pick up your tiger's poop? (BTW, you should check out A Brave Face if you haven't already cuz Wendy's posts are great, like this one: What's the Rule on Cat Jewelry? As a bonus, check it out and see if you agree with me that her pup June looks like what I imagine Rita looked like as a tiny pup.)

I and Love and You - And They and Love and Us!
In my post about Marketing Genius, lots of folks mentioned they don't have Sprouts stores near them. Well, Charlie from "I and love and you" left a comment saying, "For all of you looking for stores in your area please visit our website store locator. Anything else you need, please reach us at Questions@ilypet.com!" And... I got an email from them saying they saw my review and really appreciated it, as they are a start-up company, and they noticed I said I'd like to try the dehydrated food, so they are going to send me some samples - with no obligation to review. Isn't that nice?

Also on that post, Molly the Wally, The Little Dog with a Blog said, "Sprouts......shudder at the name here...!" "Here" meaning the UK. I wondered why that would be so I googled what "sprouts" means to Brits, and it looks like it refers specifically to Brussels sprouts (whereas here in the US it refers to the new shoots/first signs of life from a plant). Is that what you meant, Molly? Because I tend to shudder at Brussels sprouts too!

Your Dog Does Sing?? - Jealousy & Another Funny Comment
When I asked on Mirth Watch Thursday if your dog sings or says I love you, Sue of Talking-Dogs said, "My mom had a rescue dog years ago - part cocker, part ? - that, among other things, said I love you. Very clearly. :-) Jeffie and Rosie 'talk' and Jeffie 'sings.' Lucy was the real talking dog - very vocal and we carried on 'conversations.'" I'm so jealous! But I guess when your blog is called "Talking Dogs," you oughta deliver the goods.

The hubs' dad also says that they had a dog that could say, "I love you, Momma." They spoke French though. I forgot to ask if the dog (named Finette) actually said, "Je t'aime maman". I'm guessing she said it in English... which is a pretty amazing feat given her being surrounded by francophones! (BTW, it's his birthday today - Happy Birthday, Yvon!)

According to the hubs' uncle, this is a pic of Finette - and it looks like she could carry a tune as well. 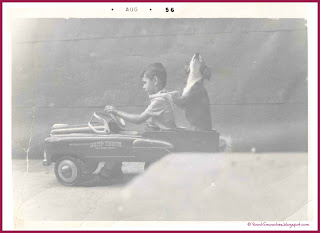 In another comment that made me laugh, Diana of I Heart Shark! said, "It's probably a good thing Rita has only muttered 'Momma' in private, otherwise crazies (me) would lure her into their houses with a Himalayan chew. (Now I'm thinking about a dog-snatching ring where the dogs spill it to the cops...) (But a talking dog was worth it, officer!)"


Rest assured, Diana, that Rita could never say "Diana," so she probably wouldn't be able to "spill." But she could sniff you out of a line up.

I'm also very jealous of Kathy at K2K9 who says, "I've not tried to get any of them to say 'I love you' but Hector just DID!! Really, each morning, he would yawn and one of two 'phrases' would come out: Either 'Hellooooo!' (say in a Mrs. Doubtfire voice!) or 'I love you!' A dog that can make you wake up laughing every morning, how special is that? he was one of a kind, but I have noticed that Cooper does the Mrs Doubtfire Hello sometimes!!"

Love that. And she didn't even have to TRY. Her dog would just say I love you. Lucky! (If you are unfamiliar with the "Mrs. Doubtfire Hello" go here and watch this 17-second, guaranteed-to-make-you-laugh video.)

A Wee Follow-up Re: the New Book
Look what came in the mail! It's my the review copy of Rescue Me, Maybe. 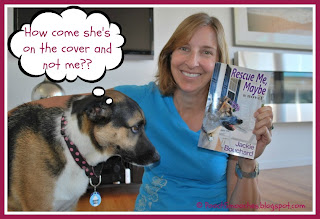 Rita was... less than thrilled. But I managed to get Rita to read a bit of it. 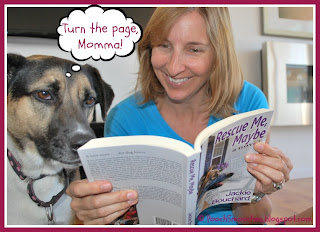 Here's her review: "This book looks - and smells - really good. I would literally like to tear through this book!"

Now I have to sit and read the book for the 800th time. "They" say, if you want to write, write what you'd like to read. They say this because you will end up reading your book 800 times! So you don't wanna get toooo sick of it. Anyway, the 9/16 launch date is creeping closer!

Wow, that was a lot of following up. I hope you hung in there.

Thanks again to Jodi and JoAnn for hosting!
Posted by Jackie Bouchard at 4:01 AM

Email ThisBlogThis!Share to TwitterShare to FacebookShare to Pinterest
Labels: Cute dog pictures, Follow-up Friday, Follow-up Friday Blog Hop, Heart Like a Dog, I and Love and You, Rescue Me Maybe