It's Blog the Change for Animals time again!

It kinda snuck up on me this time, and I wasn't sure what to write about - but then I remembered a big pet-related item in the news this week in San Diego: the City Council voted to ban retail store pet sales.

...and that means it's time to answer those burning questions (if it's burning - go see a doctor!) and follow-up on the news!

Back to the Fair - One Last Time...
My sis and I had to go pick up our winning felting displays at the fairgrounds the day after the fair ended, which means we got to pick up our big ol' ribbon (plus a certificate and a little gift of a pin with the fair's "game on" logo. Oh boy.) We are still waiting for our checks!

I brought the ribbon home and made it into a hair-bow, which I've been wearing ever since.

I know I mostly only post about how cute and sweet Rita is (and how she hardly ever gets into any mischief, leaving me scrambling for ideas for Monday Mischief posts) but she does have some ... issues. Because of her issues, we started working with a trainer.

There's a house on one of our favorite walking routes that leaves out a bowl of water and a container of cookies for the pups. We usually stop with Rita to enjoy a cookie on our way home. 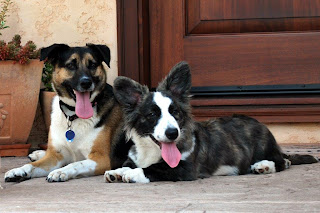 Wordless Wednesday: On a Walk in Bird Rock

As I mentioned during K9 Kamp, we do a lot of walking. And we don't usually get bored, because we have lots of different, nice routes we can take. One of our favorite walks is to head down to a little neighborhood known as "Bird Rock." It's called this cuz there's a rock. And birds sit (and do other stuff that rhymes with sit) on it. [Sorry this is wordy - you don't have to read it. You can just look at the pics!]