Rita was miffed that I called her "lazy" in my post last week. She insisted that I "roll tape" to show how crazy she gets over her Unbreakoball. (We'll get to the tape in a minute, Rita!)

Ages ago (probably before most of you found PoochSmooches), Rita won an Unbreakoball. She LOVES it. I don't know why she gets so nutty over this toy! It's like nothing else we own.

I don't bring it out often because it's hard plastic and a bit scratched up, so that plus hardwood floors is not a great combo. And she can't play with it in our yard because we live on a super steep slope, and if it rolls off the deck, it's a goner.

But I got it out the other day and she immediately went nuts.

These pics are all a blur cuz she runs by so fast with her prized possession.
Maybe she's still a little lazy, since she still likes to take it to her bed and attempt to munch on it. 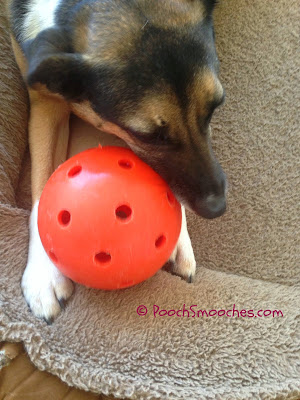 I think when you watch this short video you'll understand why I don't get it out that often!

Did you hear the funny noises she makes?

Here's another wee vid of her trying to munch on the thing (not really possible) and making more snorty-pig noises:

Okay, so maybe she's not lazy. Maybe she's just uninspired by your average ball. Maybe her muse is a bright orange piece of hard plastic!

Do your pets go crazy over one toy more than others?

(P.S. You may have seen this post up briefly last week. I'd scheduled it to post while we were away on vacation, but when it went live the videos were no longer working. I had no way to fix the videos since we were away from home, so I had to pull it down. On a related note, hope to share some good vaca pics soon!)


Thanks to BlogPaws for hosting! (And thanks for letting me be a little wordy...)

Posted by Jackie Bouchard at 8:45 PM