I'm excited to share that my second novel, Rescue Me, Maybe, won a Gold Medal award in the Readers' Favorite 2014 contest in the Fiction - Animals category!

Rita looks way cuter in the medal than I do, so she'll model it. (As you can see, she was not super thrilled about the modeling gig. She would rather have a treat than a stupid medal any day! And just so you know... she did get a treat too, of course!)

In Other News...
Since the year is now 3/4 over, I thought I'd revisit my New Year's resolutions that I shared on January 2 on the blog.

Rita resolved to help me move my butt mutt!

To be more specific, I had 3 resolutions. So here's how I'm doing on each:

1) Get an average of 10,000 steps per day. I'm on pace! I keep my phone with me all the time, with my Accupedo pedometer app on it. It tells you your average steps for the month and year, and I'm at 10170 steps/day average as of today. Just a few more months to keep it up!

2) Be better about doing my exercises for my back. I haven't been great about doing these, but I've been "better" than I was last year. So, check! ;) (Okay, guess I should be more specific. Maybe I should say I'll try to do them at least twice a week.)

3) Try my darndest to finish and publish my third book this year. In January, I said that "may mean less blogging, so I may...just post on M,W, F." Well, you may have noticed I pretty much only blog on M & W now, but at least the book is done! (Or done-ish.) If I was self-pubbing it, I'd be in the home stretch now, getting it ready to publish in October, but I shared a while back that I'm giving the traditional publishing route one more try. So, the manuscript is with my agent at the moment. She already read it once, and asked me to do some "modest tweaking" to the first half. I agreed with her suggestions, so added about 4000 words and sent it back. Hopefully she'll think it's ready to pitch to publishers soon!

This is pretty much the only time I've been this successful (so far!) at keeping my resolutions. Most years I don't make it through January! 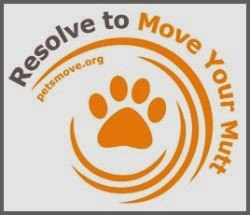 As for Rita, her resolution - besides moving her mutt-butt - was to finish Obedience II. Unfortunately we've been a bit thwarted there. We finished half the class in April, but then the hubs and I had to go to Canada to be with his mom, so Rita and I missed the last 3 classes. The trainer said we could make them up, but so far every time the class has been offered, the classes we need to make up end up being at a time when we're not around or have other commitments.  At this point, I guess I should just resolve to work with her on reinforcing the things we learned in the first half of the class.

How about you? Do you make resolutions? Are you keeping them?

Unlike last week, I'm back to my wordy ways... Sorry!

Posted by Jackie Bouchard at 8:46 PM