I'm guessing you've seen on the news (or my Facebook posts) that San Diego county experienced a rash of fires the last few days. At one point there were 9 of them!

Here's a fuzzy pic from my phone showing the news graphic of the 9 fires.
(BTW, we're fine - we live well west of where the fires are.) 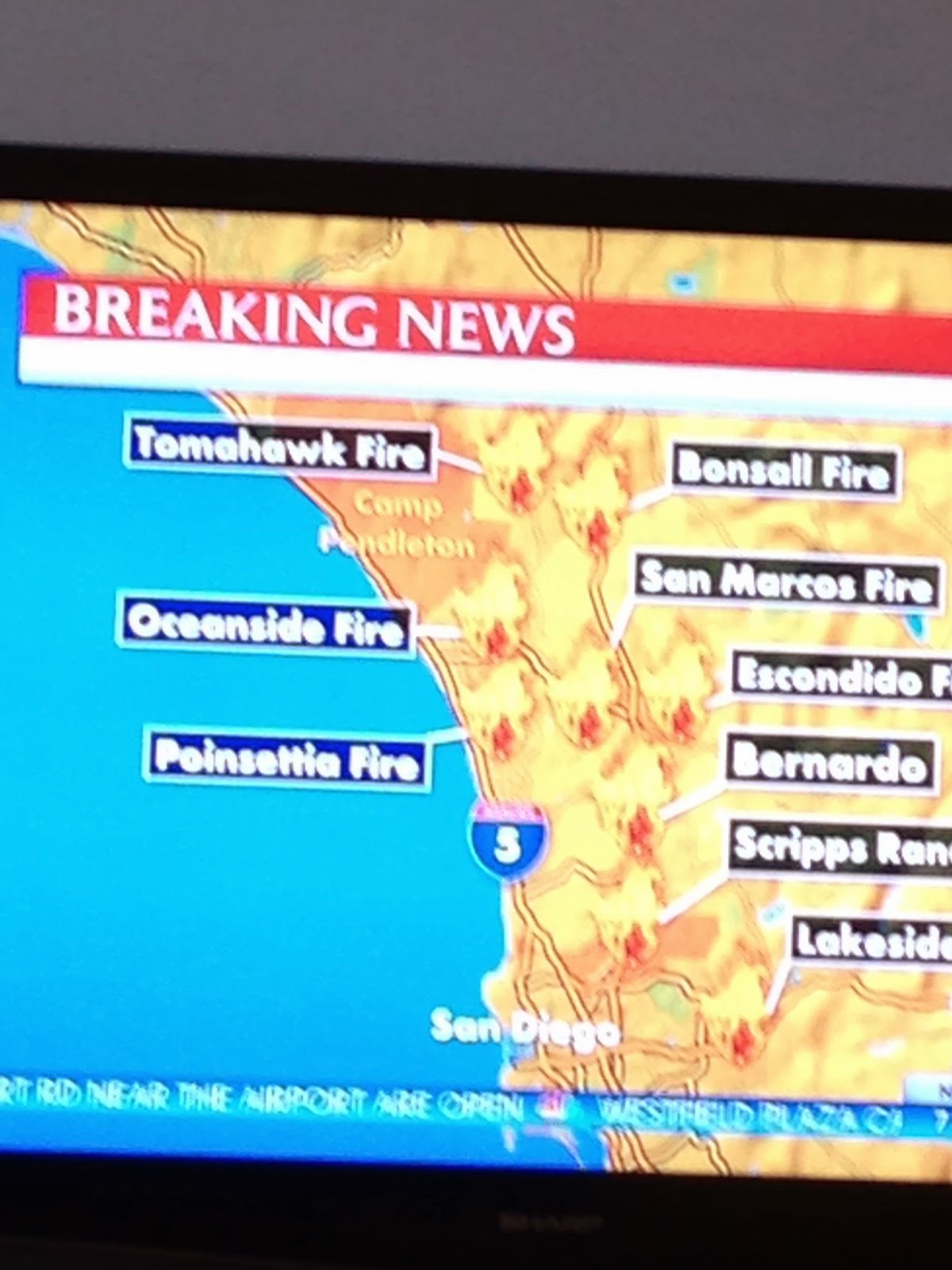 Ironically, this is all happening while it's Wildfire Awareness Week in California. Yep, you could say we are aware now! In fact, even though we aren't close to the fires, I was afraid to leave Rita home alone, just in case a fire would break out in our canyon. (It's happened before, although they put it out quickly!)

We aren't supposed to have this sort of hot, dry, windy, fire-danger-y weather until October! But unfortunately, while most of the rest of the country froze, we had a HOT, dry winter. And now we are having an even hotter, dryer spring. Ugh. (Where is my May Gray?!)

So, what to do for fitness when it's too hot to go for our usual long daily walk? Hit the beach!

Yes, Rita and I went back to the beach. It's not our first time back since "the incident", but we haven't been since... hmmm, I think it was September. We went back a few times after I got hit by the insane-asshat-with-a-stick, but I just wasn't comfortable anymore.

Let me 'splain - I'm not afraid for myself. I'm afraid for Rita. Lots of folks said, "Don't let the bullies win" and "you should go back!", etc. BUT... the problem is that the thing that instigated the whole ugly mess was my friend's dog running at a submissive pup. Let me clarify that her dog didn't hurt the pup in any way - just ran at it and intimidated it.

Well, Rita does the exact same thing! And since Rita's recall is not what it ought to be (yet! We're working on it - but our 2nd round of training classes was interrupted by being away for two weeks) I don't feel comfortable there now. I'm worried she'll rush a submissive dog and the owner will kick/hit her. That would be a HUGE setback for her!

Now, normally on Wed's we have a standing playdate with Rita's buddy Dakota. Dakota's mom has been working me to get us to come back to Fiesta Island. She tells me how quiet it is down there, and how all the old regulars ask about us, etc.

So, this past Wed, it was just too darn hot to walk/play in the yard, so I finally gave in and said we'd meet her at the beach.

It started off badly, since the first person I saw was this crazy lady who walks a pack of about 7 dogs and who regularly yells at other people/dogs. (She once yelled at Rita, while Rita was just playing, "No showing teeth at the dog park!" Well... that's how Rita plays. How do you play Bitey Face with no teeth showing?) So, Rita and I hung back and I put her on the LONG lead.
Once Dakota showed up (and the crazy lady was off in the distance), I switched her to the short lead.

She was actually fine with this Great Dane, which was good as she can be scared of big dogs.

But then the very next dog, she rushed and bullied. Luckily the owner was cool about it, but after that, she spent the rest of the time on the long lead!

There were no other incidents, and she got some good exercise, but I was on edge the whole time, looking for dogs we didn't know. And there were TONS of strange dogs there yesterday because it was so darn hot that EVERYPAWDY wanted to take their dogs to the beach for their exercise!

And... worst of all... two of the regulars told me that last week they saw the insane asshats that hit me! The regulars hadn't seen them since the incident... but they're baaack. (At least they were sans sticks.)
So, we likely won't be going again anytime soon. We'll be waiting until Rita's recall is vastly improved, and until the weather cools off and it's no longer insane asshat season. (So.. in other words, we might never go back...)

I suppose I should search and read people's posts about staying fit when it's too cold to walk, because now we are in the too-hot-to-walk situation! Guess we'll start with some indoor training!


Any other ideas for indoor exercise? (Keeping in mind that Rita is not a ball/fetch-player!)

Thanks to SlimDoggy and co-hosts Peggy's Pet Place and To Dog With Love for hosting FitDog Friday!

Posted by Jackie Bouchard at 9:49 PM