Wordless Wednesday: The Power of Jerky

As you know, we've been in the midst of a backyard renovation project. It had hit a snag (caused by the city, which tried to give me a heart attack from the stress of dealing with them to get our permit, a process that only took about 10 days longer than it should have...), but we are back on track now. This is good news for me and the hubs, but terrible news for Rita, since she HATES the strange men in the yard.

Here she is in typical Cujo-mode when she sees the men out there working (been keeping the blinds down, but as you can see that doesn't really help...):

But... here is she is enjoying her Decadent Doggie jerky (remember we won some awesome jerky?!) in front of the window, with the same scary man just feet away. This jerky is powerful stuff - it has powers to soothe the savage beast:

Here she is in a blissful post-jerky stupor.

Unfortunately, the blissful post-jerky stupors don't last nearly long enough! I probably have enough jerky to keep her a heck of a lot quieter, calmer, but she'd gain another 30% of her body weight.

So, in the meantime, I'm trying locking her in the bedroom with the radio set on a classical station. The bummer is that she can still see out at them if she pokes her nose through the blinds, but it seemed to be okay this afternoon. Only mystery was that when I went back in the room later, it was on a rock station.

I guess she prefers that to the classical. Sorry about the wordiness on wordless Wednesday! 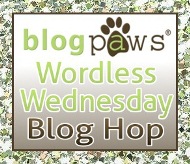 Posted by Jackie Bouchard at 7:47 AM