Monday Mischief: Pixie Sticks Her Nose Where She Shouldn't

Today, we have a guest mischief-maker that we're featuring - the delightful Pixie. (Rita's just been such an angel, we had to go hunting for mischief.) Doesn't she look sweet?
Don't let her cute looks and diminutive size fool you...


Our story begins when I got a desperate "can she be saved?" email from my friend, Pixie's mom, who was also angel Rio's mom. Her email was in reference to the Mini Rio my sister and I had felted, which originally looked like this; 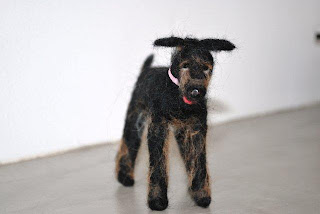 That's right - little Pixie decided she could improve on our work. (The fact that these are made of wool and therefore must smell very tantalizingly of sheep should be taken into account here. A puppy can only resist so much temptation...)


Luckily, I was able to perform a leg-on-tomy (times 4), a rebuild of the neck, lip-o-suction (get it? Cuz her bottom lip was coming off...), and a tail-graft. Thus, Humpty Dumpty Rio was together again.
But, did Pixie stop at dismembering a member of the household? Nope, she also decided to remodel the living room after the bathroom door was left open:
Perhaps this is all just payback for Momma dressing Pixie like a mermaid (merbitch?) on Halloween:
Way to go Pixie! You are in the running for the Mischief Hall of Fame!

Posted by Jackie Bouchard at 7:50 AM