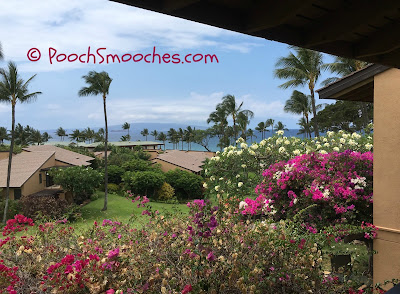 This time, they even put me behind bars while I was there: 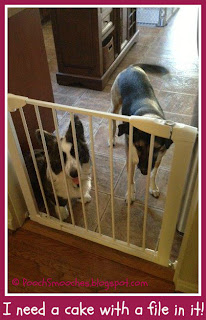 Sorry about the lack of blog update last week, but we were away on vacation. While we were away, Abby stayed with my sis, Terry, and her hubby and their corgi, Abby's cousin Lou. She had a good time there, and even learned to master their doggy door - which is pretty amazing since she is all legs and he is height challenged, as you may remember from the classic "Stubs & Stilts" photo. It's a bit blurry, being an action shot, but below is a pic of her coming in through the doggy door. There's also a pic of her cramming herself into a tiny space in their kitchen behind their table. Not sure what that was about, but she does seem to enjoy tight cozy spaces, as evidenced back when she was a pup and climbed into the kitchen cupboard. (Yes, if you linked to the pic, those ARE her dirty feet in my frying pans. I promise I washed them after... Then again, maybe I didn't...) 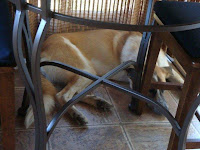 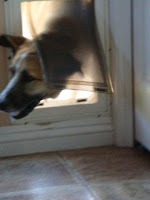 Speaking of feet, here are my pink-toe-nailed feet on a gorgeous black sand beach we went to in Maui, plus a bunch more Maui pics (muy Maui pics, you might say): 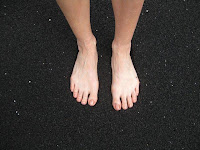 But enough about us... back to the dog, which is why we're all here. Back home, we gave Abby the shark we bought her as a sort of sorry-we-went-away-but-we-know-you-didn't-really-miss-us,-hanging-out-with-your-aunt-and-uncle-and-tormenting-Lou-and-going-on-your-three-walks-per-day! gift.

We thought a shark had a sort of Maui-esqueness to it (even though the only scary sea creature we saw was an eel... oh, and that naked old man at Po'olenalena Beach.... Don't go over the lava rock to the far right end of Po'olenalena... Just a warning. I mean, unless you're into that sorta thing...) We also bought her the shark because it sported a little tag saying it was rated a "7 on the Tuff scale" (a regular ol' store bought stuffed squeaky dog toy gets only a "2" rating). We knew she probably really needed a "10", but they didn't have any, and we thought the thing was SOLID. It's HARD - you could hurt someone with it, and it's triple stitched. 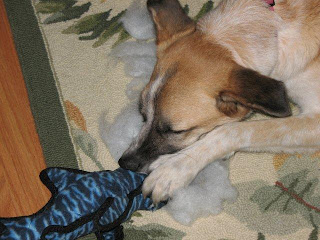 And...here it is a mere 15 minutes later. She did exactly what you are supposed to do when confronted with a shark - went for it's vulnerable part: it's nose. (We probably should have suspected that anything that rates toughness on a "tuff" scale was not actually going to be all that hard of a nut to crack...) 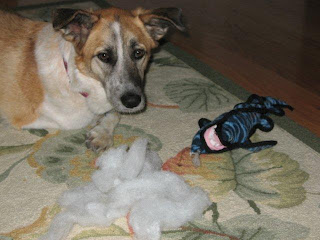 Spoiled little girl ALSO got a pink stuffed doggy from her aunt Terry. 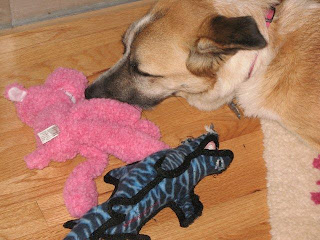 Here is what that doggy looks like two-days after: It's missing an ear, and two of it's legs have been gutted and de-squeakerized, but it keeps on smiling.
In a final bit of news, Abby started back yesterday on her full metronomic protocol of Palladia/Cytoxan on alternate days. Yes, she's a solid citizen again. Hopefully she stays that way and continues to benefit from the meds. Take that, Lone Met!