Last week we went to Flagstaff for a little vacation, in search of snow since Rita had never seen it before. Unfortunately, it ended up being really warm, which was nice, except that it was too thawed for any showshoeing, but not thawed enough for hiking. Bummer!

We attempted one very muddy hike in Flag in the trails behind Buffalo Park. (Buffalo Park is a nice spot to walk your on-leash dog, with a nice flat loop trail. At the back of the park, there's also a connection to a much more elaborate trail system. But it was too muddy to go very far when we were there.)

Here are Rita and the hubs in the park, with the arrow pointing out the only "real" snow in the background. 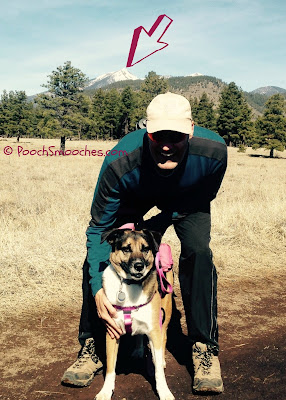 Even if the snow was old and crusty, Rita seemed to enjoy her first ever encounter with the stuff! 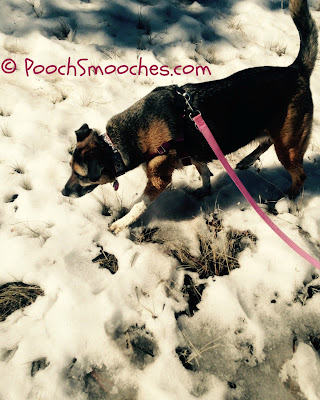 It made her a little nutty - hard to tell in this pic, but she immediately started racing around in it! 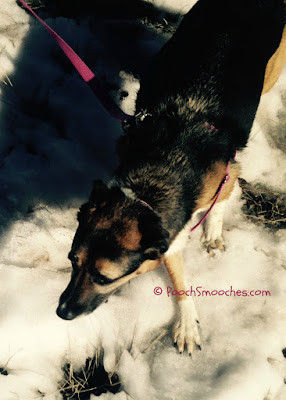 And she very much enjoyed the few sad, little snowballs her pop made and tossed in the air for her. 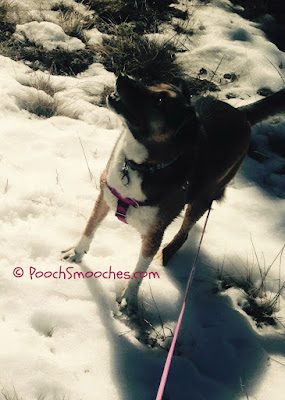 But, even better (in her fuzzy opinion) was the big patch of melted snow, where she could dunk herself and cool off after our short, muddy hike. 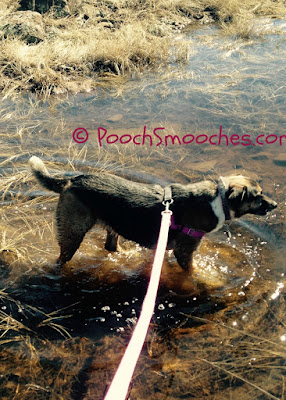 Afterwards I tried to get her to pose with this big guy at the park entrance, but all she could think about was buffalo-flavored snacks. 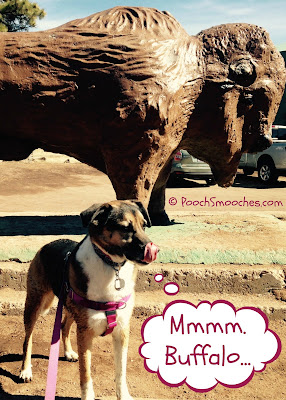 Since the hiking in Flag was no good, we drove back to Sedona one day, and hiked the same Soldier's Pass trail we did back in December. I won't share the pics since they're pretty similar, but man... it was hot this time! Rita was really glad to find a big puddle to dunk in at the end of our 5-mile hike! 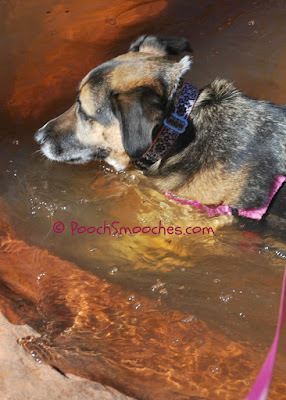 And that night, she crashed! 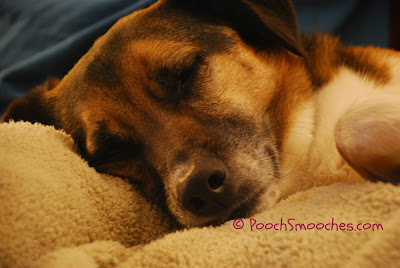 The next day we went to the Grand Canyon. Thanks to the Go Pet Friendly blog, we knew we could bring Rita along and hike the South Rim Trail. (If you don't know... most trails in National Parks are off limits to dogs. Boo!) Although it's a paved trail - so not exactly rustic - it's got an amazing view all the way along, so definitely worth checking out with your pup if you're ever in the area!
There were some old snow patches there as well, which Rita enjoyed for cooling off. 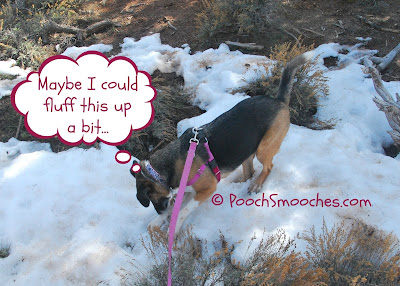 She was really funny, because in any spots where the snow encroached on the trail, she'd walk on the snow. Our girl loves to keep cool on hikes! 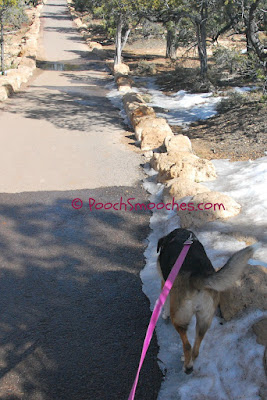 One bad thing about the trip is that Rita's car anxiety on long drives is getting worse. She normally loves the car, but long trips bother her. We gave her Rescue Remedy, and tried out her new Thundershirt, but she was still panting and tail-tucking. It's something about the noises when we hit bumps in the road. All three of our dogs have gone nuts in the car when we have to drive over a cattle grate, and unfortunately there are a lot of those in AZ! 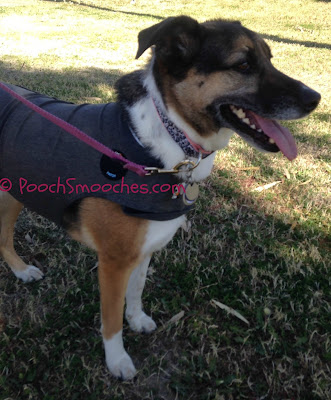 Poor baby. We have to figure out a way to help her with that since we love to take her along with us!

Anyway, it was fun taking Rita to see snow for the first time, even if it was old and crusty. Hopefully  if we try again next winter we'll have better luck!


Anyone want to send us some of your excess snow??

In Other Quick News...
I also wanted to share the funny review that Roxanne Hawn wrote for House Trained over at her blog, Champion of My Heart. I'm pretty sure you'll find that quote from the review intriguing... I know I did! :) Thanks, Roxanne!!

Thanks to BlogPaws for hosting Wordless Wednesday! Thank you for letting me be wordy! You can check out all the blogs in the hop here.

Posted by Jackie Bouchard at 9:03 PM