Wordless Wednesday: Beam Me Up

This is my sister's cat, Topi. He's very sweet. I think this pic looks like he's going to put a tractor beam on me and beam me up. (Either that or use some sort of death ray to blast Rita to smithereens...) 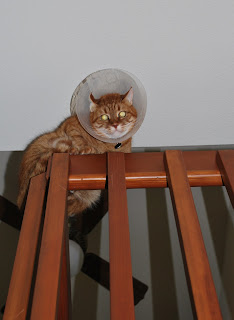 I'm allergic to cats, but I get over it if I live with them. I was highly allergic to the cat that adopted us when we lived in Bermuda, but within a week, I was picking her up and rubbing my face on her with none of the throat-closing effects I'd experienced when she first showed up. She was such a cuddler, I've often thought maybe we should add a cat to our familial unit. But Rita had a very negative reaction to meeting her first cat! (In fairness, the cat wasn't so hot on her either.)

As you can glean from the picture, we separated them by keeping Topi upstairs and Rita down. It took Rita hours to even realize Topi was there, but when she did, she alerted us: OMD, DID YOU GUYS KNOW THERE'S A FREAKING CAT IN HERE!? Topi responded by shooting more death-ray looks at Rita.

I guess we won't be getting a cat anytime soon. Besides, what Rita really wants is a puppy. (And to learn how to open the fridge.)