Q&A with Author Barbara Techel - "Wisdom Found in the Pause"

Some of you may already know my guest today, or you might remember her previous visit to Pooch Smooches (especially since it was a very memorable post called "Poop Happens"). Please welcome author and all-around lovely person, Barbara Techel!

Barbara has a new book out called "Wisdom Found in the Pause: Joie's Gift." It's available on Amazon as an e-book or paperback.

Today I'm interviewing Barbara, and you can find my review at the end of the post!

Being Wordless With the Word of the Year

Did you hear what the Oxford Dictionary said the word of the year is for 2013? 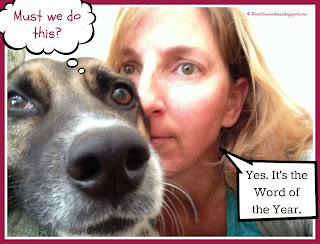 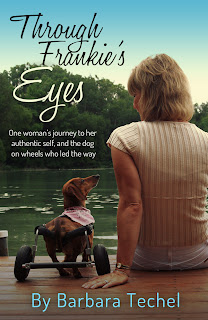 Today on the blog, we have a very special guest post from friend and fellow author, Barbara Techel. In her new book, part memoir and inspirational, Through Frankie's Eyes: One Woman's Journey to Her Authentic Self, and the Dog on Wheels Who Led the Way, Barbara takes us on the journey that led her to live her own truth and live with more joy, all because of what her Dachshund, Frankie, was teaching her along the way.

I read Barbara's wonderful book and I'll share with you the review I wrote on Amazon:


As the subtitle states, Through Frankie's Eyes takes you along as author Barbara Techel seeks her "authentic self." There was much in this book I could relate to. Like Techel, I, too, was late to figuring out what I wanted to be/do with my life. I also have struggled with worrying too much about what others think and have wondered if I was normal because I preferred "fur kids" over the real kind. I've also had a dog with bone cancer, and I've learned so many important life lessons from my own dogs. If you see yourself in any other those situations (and haven't so many of us at one time or another struggled with finding our purpose in life?), I think you'll also enjoy this tale or a woman's wonderful journey with an adorable little dog who teaches her so much about living life to the fullest. (Have a tissue or two handy!)

So, without further apoo - I mean, ado! - take it away, Barbara:


Whether your dog walks on all four paws, or needs a little help like my Dachshund, Joie (pronounced Joey), who has a dog wheelchair, we can all relate to the delicate matter of talking about, err, um, well… poop!  There, I said it!

My first Dachshund, Frankie, became paralyzed at the age of six. She was diagnosed with a common disease in the breed called Intervertebral Disc Disease (IVDD).  Little did I know after she ruptured a disc, and then surgery that might help her walk again, what lay ahead for me in taking care of her.

After her surgery when talking with the veterinarian technician via phone I heard the words, “You will need to learn to express Frankie’s bladder.” I wondered, what in the world did that mean?

Because of her paralysis, this is the side effect to IVDD. They are not able to feel when they have to go. I would soon learn that pressing gently on either side of Frankie’s bladder would expel the urine from her little body.
Now poop?  Well, that is another matter all-together! Timing is everything and means either finding “gifts” around the house, or getting her over the toilet in time for those little buggers to plop into.

In the beginning I nearly lost my mind as I could not figure out the timing of when she had to go #1 or #2, to be polite in describing her frequent messes. Eventually I decided to change my attitude about her daily duties and trust that all would work out. Once I did that, things seemed to get a bit easier.

That is, until one day I had her in to see an acupuncturist.  All went well with the treatment and Frankie was feeling quite relaxed. I picked her up and held her in my right arm like I often did, as if carrying a football, with my purse slung over my shoulder.

I made my way to the counter to pay for the one hour treatment.  As I glanced into my purse to get my checkbook, I wondered what it was I was seeing in the crease of my checkbook cover. Upon closer inspection, I realized it was a small turd. Yup, there it was, lodged into the crease (and just so you know, it’s hard for me to even type the word turd, much less say it- it just seems so un-lady like)!

Being the brave dog mom I am, without saying a word, I gently shook the little guy to the side, took out my checkbook, wrote the check, handed it to the receptionist, and proceeded to the front door.

The minute I was outside, I erupted into laughter! I couldn’t help but think there aren’t too many people out there who can say they’ve found poop in their purse. Tears streaming down my face from laughing so hard I got in my car and immediately called my husband. We laughed for what seemed like forever.

I share this story in my recent memoir, Through Frankie’s Eyes. Since its release I have heard from others about their IVDD dogs and the places they have also found unexpected “tootsie rolls.”

One woman shared with me that at a dinner party, after uncorking several bottles of wine it was time to re-cork one of the bottles they didn’t finish. The lighting was not all that bright and they couldn’t find the cork. One of her guests began feeling along the floor. He came up with what they thought was the cork, but was actually a petrified turd.

Another lady wrote to me sharing that one morning as she was doing some things around her home she kept smelling poop.  She couldn’t find it anywhere!  She knew it was likely her paralyzed little guy had gone somewhere, but she just couldn’t seem to find where the smell was coming from. Just as she was about to give up, she put her hand into her robe pocket.  The mystery was solved…and it seems like another Dachshund has good aim just like Frankie!

Before having an IVDD dog if someone would have told me these stories, I would have been horrified. But it is one of those things I’ve learned to move past, and instead focus on all the joy and blessings Frankie brought me, and now Joie. I just wouldn’t trade that for anything!  And luckily, when you have a small dog, well, one can certainly deal with those little buggers no matter where they decide to show up next.

Do you have a funny poop story?  Please do share! 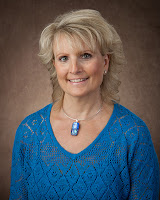 About Barbara
Barbara Techel is a passionate advocate for dogs with Intervertebral Disc Disease (IVDD) and dogs in wheelchairs. She is also passionate about helping others see their challenges in a positive way. After her dachshund, Frankie suffered a spinal injury she was custom-fitted for a wheelchair and Barbara realized the beautiful opportunity she had to spread a positive message that animals with disabilities can and do live quality lives if given a chance.

In addition to writing Through Frankie's Eyes, in August 2012, Barbara founded National Walk 'N Roll Dog Day in memory of Frankie and in honor of all dogs in wheelchairs. She also started the Frankie Wheelchair Fund which helps dogs who need wheelchairs whose families may not be able to afford them, or for dogs in rescue. To date she has helped fifteen dogs get wheelchairs. 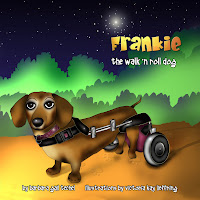 She is the award-winning author of the children's book series Frankie, the Walk 'N Roll Dog which are true, inspirational stories about her paralyzed dachshund. Frankie teaches us that no matter our challenges, we can persevere with a positive attitude. And despite our challenges we can each give back in our own, unique way. Frankie is Wisconsin Pet Hall of Fame Companion Dog.

Barbara and Frankie have been featured in Woman’s World, and countless other magazines and articles on line.

When not writing or sharing Frankie’s mission she loves spending time with her new “walk ‘n roll dog” Joie, her English Lab Kylie, and husband John. She also practices yoga daily, enjoys reading, and relishes in the simple things of life.