If you've been around the blog a while, you know my mom passed away in December. While going through her things, my one sister found 9 letters that my dad had sent to his parents during WWII. 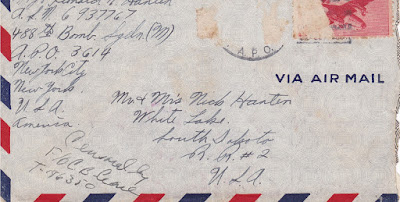 There are surprising tidbits in some of the letters. For instance, he drops the news on his mom that he's engaged. I'm sure she was surprised to read that - as were we, since he wrote that he'd gotten engaged to some gal named Evelyn, which is not my mom's name! (Have no idea what happened with Evelyn.)

But another surprise was the mention of buying a dog while on a 3-day leave in Tel Aviv! What?? Of the war stories I heard my dad tell (and I heard a few since I sometimes traveled along with my mom and dad to his "bomb wing" reunions), I don't remember him mentioning that he had a dog!

He and his good buddy, Dannie (who I met at one of those reunions - he was a great, very funny man), kept Trixie with them in their tent where they were stationed in Egypt. He wrote, "Boy is she ever smart. She really minds." As a bonus, they also found she was housebroken.
A few months later he wrote about Trixie again: "Trixie is still as lively as ever. She really tears around. She's really full of pep. I wish I had half her energy." (He also mentions getting 2 packages of record albums from Evelyn - I'm glad to note he mentioned the dog before the girlfriend. That was probably a good indicator that Evelyn wouldn't last...) 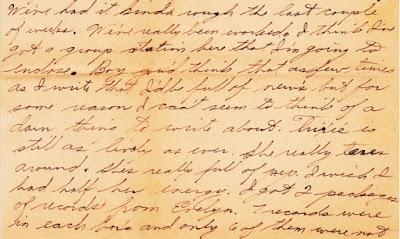 In another letter he writes about how they've been moved to Pompei, Italy. No mention of Trixie, so I was getting a little worried about her. (Yes, I worried about a dog that I never met and who has been dead for decades now....) I was very relieved to find that another letter dated about a month later mentioned Trixie again: "Trixie is more full of pep than ever since we've moved out of the desert."

My sis also found this photo, which says "Trixie, Pompei Italy, January 44." This is the last reference I've got to Trixie. 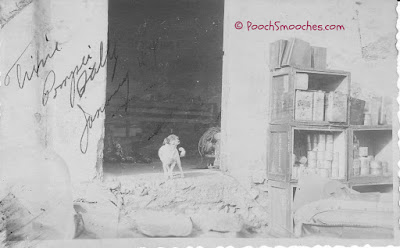 She was a cute little thing wasn't she?

I enjoy thinking about them, snuggling and playing with their dog during what had to be a very stressful and trying time. I do wonder what happened to Trixie when the war was over, though. I like to imagine that they found her a nice little Italian family to live with, but we'll never know.

Wish I'd known about Trixie sooner so I could have asked my dad about her. He was a dog lover, so I'm sure he loved that little pup!

Email ThisBlogThis!Share to TwitterShare to FacebookShare to Pinterest
Labels: Dogs during WWII, Old black and white pictures of dogs, Trixie