Monday Mischief: What Rita is Reading

I was sitting out in the backyard this weekend with my book. (Sorry... a little mischief there... I know many of you could not sit out in your backyards at the moment for more than about 2 minutes without freezing...). Anyway, I hadn't started reading yet, and just had the book in my lap. Rita came over and kept shoving the cover open with her nose. She's never done that with a book before, so she must have thought it looked (or smelled) good! 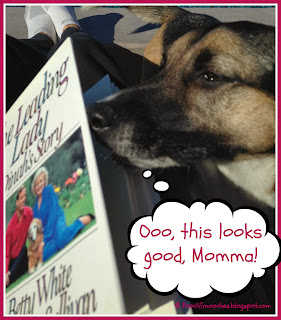 So far, it's a very interesting story, co-written by Tom Sullivan and Betty White, called "The Leading Lady: Dinah's Story."

Remember when I told you all about our night at the Gala of Hope, and how the famous blind entertainer, Tom Sullivan, was the keynote speaker? I mentioned that he told a story of a guide dog he had, Dinah, whose eyesight was failing when she got older so she suddenly signaled that she couldn't "work" for him anymore. However, she was terribly depressed about it - almost to the point that he believed she was trying to commit suicide by not eating. Well, he told his good buddy, Betty, about the problem, and said he was distressed to think he might need to re-home her. And Betty, without giving too much thought to the matter, said she would take Dinah.

I'm only a little ways in, but it's a good read so far, told in alternating chapters by Tom and Betty. I especially love the chapters written by Betty, as she's so funny. I just hope it won't have a sad ending!

So... did you think from the headline that (in a moment of shameless plugging), Rita was going to be reading my books?

The Grinch is reading my books, and he shall perform the shameless plug!
The Grinch says, "If you're still in the midst of looking for gifts, might I suggest books? And no further you'll look!" (Apologies to Dr. Seuss. Whom I once met!) 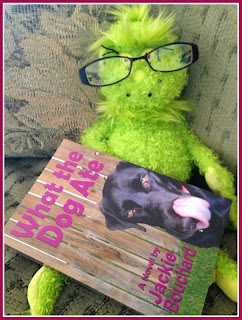 Also speaking of gifts....
(a) Have you checked out the Advent Calendar for Dog Lovers hosted by Kol’s Notes, Heart Like a Dog, My Brown Newfies, My GBGV Life & Bringing Up Bella? If not, check it out. There's a different giveaway every day - and you can go back and enter the days you've missed. As Koly himself would say, "Holy Woof!" - there's a lot of great stuff you can win.

(b) Have you entered my giveaway yet?? If not, you have until 9 eastern time, Tuesday. Go! Enter! Find out who wins on Wednesday!