Monday Mischief: Something's a Little Fishy Around Our Christmas Tree

Last week, I decorated our tree. Usually it's just a hodgepodge of ornaments collected over the years, but this year I decided I wanted to have a "dogs at the beach" themed tree, so I ordered some sand dollar ornaments and starfish, and I made some ornaments using shells. Then I decorated the tree with blue/turquoise ornaments, dog ornaments and all the shells.

I thought it came out very cute and couldn't stop looking at it. Rita, on the other paw, was interested in it for other reasons... cuz it smelled like the beach. 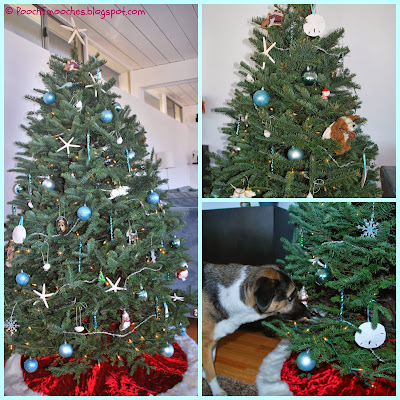 I showed her one of the starfish, she checked it out, and then left it alone - as she does with all things that aren't hers. (She's mostly a very good girl and knows what is hers in the house and what's not.) 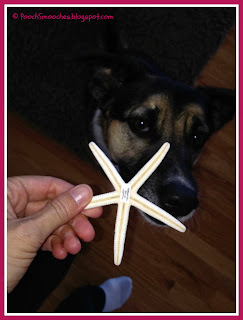 Well, that night we were watching TV, and I heard some commotion behind me where I was sitting on the couch. I turned to find this:
And this: (sorry about the blurriness, but she was all amped up, and I just had my phone)

And this:
Luckily she has only "attacked" the starfish on the tree another time or two, and has not tried to eat them - even when left home alone with the tree!


In a round of "turnabout is fair play," I got up to some mischief myself with a gift bow from an early Christmas present Rita got: 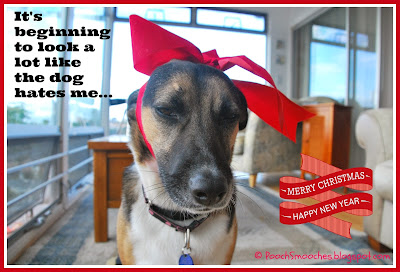 And Now For a Bit of Following Up...
I hope you don't mind if I cheat and do a quick "Follow-up" post here. I know that's supposed to happen on Fridays, but I was too darn busy last week with Christmas prep and didn't have time, and this week is more Christmas madness, so I don't think I'll be online much. I'll keep it quick(ish)!

Meet the Bloggers
First, I just want to thank all the co-hosts again, because that was a really fun hop. I'm behind and wanted to read everyone's but there were so many! Congrats on a successful hop! It was fun to SEE/meet a lot of you! Now... to answer questions on my post:

Pamela from Something Wagging said I was "not too wordy. You're not wordy enough. Now I want to hear the rest of the Bermuda story. What the heck made you move there?" I was about 2 years out of college and working at an accounting firm in San Diego, when my best friend there got laid off. She found out the same firm was hiring in Bermuda and moved there. She called me and said, "There are 10 men here for every woman." I said, "I can be on the next plane." I lived there, working as an accountant, for the next 7 years. I met the hubs my second day there. (My friend had already told me on the phone, "I met this super cute French Canadian guy!" So, I already knew he would be cute before I ever met him.)

Pet Bloggers Gift Exchange
I just wanted to thank Jan again for the lovely gift she gave me: this blog post here. It's funny, because we have so much in common that we even wrote similar posts about how we were probably separated at birth. (You can read mine for her, and see Rita singing, here.) And I think we were writing them at exactly the same time. I emailed her to ask if I could steal photos off her blog, and she replied that she was just about to email me the same question.

Thanks for letting me be mischievous and add Follow-Up Friday onto to my Monday Mischief post!

Question: If you put up a tree, do you decorate it with a theme?

Posted by Jackie Bouchard at 9:27 PM