And Yet More Needless Worrying... 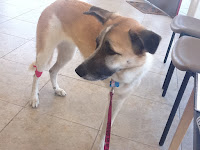 Abby had a follow up appointment at the Vet Cancer Group today with Dr. V. Sadly, her boyfriend Hank wasn't there, but she still had a fun time. They make a fuss and pet her and give her lots of cookies. Here she is sporting her pink bandage, which oh-so-smartly matches her leash and collar.
I've been a bit worried about her because we had to finally give up on the Palladia. Before, she would only occasionally have GI issues with it, but it was getting to the point where she could only be on it for about 3 doses and then she would have major GI troubles. I was worried that the Lone Met would have a field day in her lungs if we suddenly stopped hitting it with the Palladia, but Dr. V. said not to worry. What we will do now is give her the Cytoxan/Piroxicam doses every day, instead of just T, Th, S & S. So, she'll still be getting a 'hit' of chemo every day. The Cytoxan is less likely to give her GI trouble, although it can lower the white blood cell count. So far, her white counts have been really good, so we'll start the Cytoxan daily and go back in 2 weeks to make sure it's not having any negative effects. As long as she seems to be handling that OK, then I'll also start to add in artemisinin, which is part of the half-holistic, or halflistic, approach I blogged about a few posts back. If you are interested, you can read more about artemisinin here on the Bone Cancer Dogs site, but basically it's an herb that has been shown to kill cancer cells in the lab (oh, and by that I mean the laboratory - not a Labrador retriever...). They have used it as an anti-malarial drug in Asia for decades, so there's a lot of info about how it works and potential side effects. Anyway, I don't want to get all technical, so I'll just post a pic of how it all works: 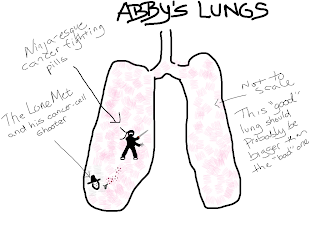 In related news, I have come to realize that the Palladia was actually making her less energetic. And, even with the Palladia, her energy was already akin to something like a toddler hopped up on cotton candy, so now it's really through the roof. I used to be able to wear her out for the day by taking her to Fiesta Island for an hour, but not so much now. By dinner time she is up and stealing napkins off the table and dirty socks out of the laundry and trying to chew on me, and just generally being her old terrorist puppy self. Here I thought she was just growing up a bit! But, no, it was the Palladia making her feel a bit, well, poopy. As a testament to her new-found almost-boundless energy, here are some (of the many) pics I took at Fiesta Island on Saturday. (Wish I'd taken my camera on Sunday too, as we met a cute Tripawd her same age named Mushroom and they actually played together! Hopefully we'll see him again soon.)
On a final note, the peaches are almost coming to an end! We've been making the most delicious peach sorbet with them! Abby loves it! (And so does Mike, which lets you know how good it is because he has mostly gone off sweets. Crazy boy.) We are going to miss the peaches so! But at least we have a freezer full of them still. 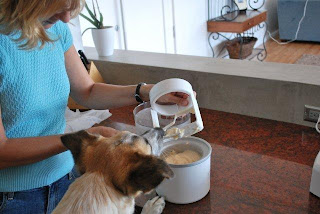 Tune in next time when I plan to blog about the Kill Barney Tour, which Abby very much wants to be a part of. (You'll just have to tune in ... wait, people don't 'tune in' on the web... you'll just have to click in for an explanation.) Type at you next time. Thanks for reading, or skimming, or whatever.
Posted by Jackie Bouchard at 4:04 PM