Abby started back up on her Palladia today, so hopefully we won't have any tummy problems this time. Keeping an eye on her, so we'll see how it goes. Last Friday she had a check-up with the oncologist and he said her lungs sounded great, so that was good. I had mentioned that we'd need to keep an eye on her weight, and she'd only lost 1/2 pound so that wasn't too bad, especially considering the 24-hours or so of tummy troubles she had.
This weekend we took her to Fiesta Island both days and interspersed her walking/playing with bits of running. On Saturday, she was still spunky enough when we finished (after over an hour there) that she tried to take off, running down the beach away from us. She did NOT want to go home yet. So the next day we really tried to wear her out and walked/ran/played for 90 minutes! Here's a little video of her running, and leaving Mike in her dust:


And here are some cute pics I took of her. 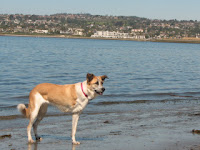 Today I took her to FI again by myself and ran into two women back to back, about 2 minutes apart, who had both lost dogs to osteosarcoma. The first woman sort of rubbed me the wrong way. I guess she must have had a bad experience, so she was giving me advice I didn't ask for - telling me to research everything (Hello, librarian here. Used to get paid to research everything...) and not let my oncologist talk me into anything. Anyway, the second lady was much nicer, but she had me in tears. Her poor doggy got bone cancer after she'd only had him 7 months (she adopted a 'senior' dog - I think she said he was seven). But she had him another 18 months after his diagnosis, and she said he was a "special gift." Just like Abby is our special gift.

Oh, one last thing... Abby is doing well in the 'popular vote' for the Orvis Cover Dog Photo Contest - she has made the first page (out of over 500 pages - not 500 dogs, 500 pages, with 21 dogs per page) for "Most Unique Voters," so thanks to everyone who voted. [The dog who is winning for "Most Money Raised" looks like she was a very sweet baby. A sweet baby who had some very rich friends.] I think the voting is open until end of March, so if you still want to donate/vote, click here: Vote for Abby There's a minimum of $5 to vote and each $ = 1 vote and all the money goes to fight canine cancer.
Posted by Jackie Bouchard at 10:21 PM