Caption This & A Chance to Win Some "Magic" 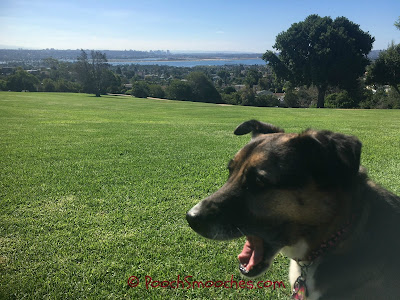 Adios Barney... And a Funny Incident

Today we said goodbye to Barney. Before we could mail him on his way, I had to fix him up. Here he is after I tended to his wounds: 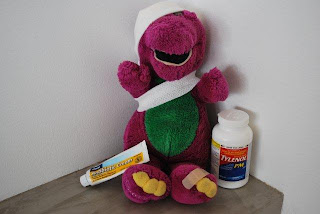 I thought he might appreciate the Tylenol PM--hopefully keep him knocked out for the long ride to his next stop (which has to remain a secret for now as per the official Kill Barney Tour rules... Yes, there are actual rules for this thing, and I am nothing if not a rule follower.) 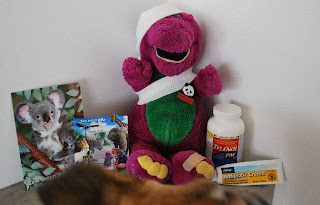 I wanted to also take a picture of him with his mementos from the zoo that we added to his box of treasures. While I was preoccupied with the camera, you can just see a little fuzzy head sneak up into the picture and make one last attempt at him.

Abby certainly did try to live up to the name of the Kill Barney Tour. She definitely had the spirit of the thing, but, poor her, her mom wouldn't let her really kill him.

I also thought I'd tell you about a stupid/funny thing that I did yesterday.

Abby does so well on three legs that (unless I hear her hopping along) I sometimes forget that she is missing that leg. Sometimes I'll come around the corner and see her standing there and just go, "Oh man." You sort of forget, for like half a second. Well, yesterday when we got back from the beach, we went to the front yard to rinse the sand off her feet like we always do. I was on her "good side" hosing her feet off, and I did the back two and then the front - and then I hosed the space where her other leg ought to have been. Yeah. Felt a little stupid about that. I've heard of phantom limb pain, but never phantom limb washing. It's been almost 10 months, so you'd think I'd really get it by now! But I guess that is just a testament to our fuzzy little girl, who sure doesn't act like she is missing anything!

Gosh. Don't know what I'll blog about in the future, now that Barney's gone. Hopefully I'll think of something! Thanks for reading.