I always wanted one of those dogs that gets you. I've had friends who say their dogs are in tune to them - so in tune that when they aren't feeling well (the human, that is) the dog will come over and look lovingly at them, rest their furry little head beside said sick person, and join them in a "medicinal nap." These dogs willingly forfeit their exercise/walk time for the betterment of their human.

I have never had a dog like that. I've always dogs who were like, "What the hell's wrong with you? Get up and take me for a walk!"

Case in point: this Sunday I was not feeling very good. I spent the entire day in my PJs, mostly sitting on the sofa watching football and the Rugby World Cup final. (The football was a bummer; the rugby was way more entertaining.) Anyway, I'm pretty sure that other than the weeks surrounding her diagnosis/amputation, this was the only day in Abby's young life that she did not go for a walk. So, did she come and lie next to me and give me one of those "I love you, Mama, and hope you feel better soon" looks? Um, no. She did this:

Now, Mike didn't want me to post this. He said (a) it shows that our usually sweet girl can be a Total Beast and (b) it shows what a terrible pawrent I am because when she is a TB, I just laugh. I can't help it! I love it when she's a beast. She gets away with murder around here, and we all know it. (I just pity the folks that dog sit her... Sorry Terry, Jon & Lou!) Anyway, we posted the Cujo Cone Puppy video, so I figured we might as well post this one too.

I'd been saving an empty peanut butter jar for just such an emergency. It came it quite handy on Sunday. After she licked all the peanut butter out as far as she could reach, I cut the jar in half. Once she licked it clean, she had a great time zinging it around the living room. Hours of entertainment! And we got to stay on the sofa!

In BIG NEWS, this Saturday is Abby's ONE YEAR Ampuversary. Not exactly sure what we will do to celebrate, but I'm sure Fiesta Island and an In-N-Out Flying Dutchman will be involved. We have now officially had Abby longer with cancer (12 months!) than without (11 months). We are proud of our Tripawd Warrior Princess. (Oh, that reminds me - did I tell you guys she is in a book?? And she's in a calendar?? And she should be on another T-shirt soon?? Well, I'll have to do another post about all that in the near future.)

In other news, we have a follow-up at the oncologist this Friday. (I'm taking them a copy of the book Abby's in, which reminds me - I need a rubber stamp so she can 'pawtograph' it for them.) Dr. V. said last time that we would do x-rays again, but I think I might veto that idea. It would be nice to know if the artemisinin is doing it's thing and keeping Boris and Natasha at bay... but on the other hand, if it's bad news, then I don't really want to know. We'll see... I'll let you know what happens.

And Yet More Worrying!

Let me just cut to the chase and say Abby had a good check up. But not before scaring us, yet again.

This latest round of scaring started last night. We were watching the Rugby World Cup (which is INSANE and so interesting to watch, btw. If you've never watched rugby before, it's pretty fascinating. You can't believe the things that happen to these big beefy dudes and how they throw themselves at each other - and yet, no one ever gets carried off on a stretcher! At least, not that we have seen yet...) Anyway, we were watching US v. Russia - nothing like a good old cold war rivalry - and the US was doing well*, so Mike yelled "Go!", and Abby went.... She started racing up and down our long stretch of hardwood floor and spazzing out, and then suddenly pulled up lame. She flopped over onto the area rug and held up her lone good front leg out as if to say, "This hurts really bad!

Panic set it, but after a few minutes of resting, she was up and hopping about again. Then in the night I heard her get up to bark at something. She must have re-hurt herself, because in the morning she could barely walk. I attempted to carry her around all morning (she insists on being in whatever room I'm in), which was just barely doable. She is "only" 45 lbs, but rather unwieldy.

I got her oncologist visit rescheduled to an earlier time, got the Tripawds folks busy sending positive thoughts (or "pawsitive" as we like to say on the site - yes, we are silly that way), and hoped it wasn't a case of the cancer spreading to her good leg.

At her appointment, Dr. V. messed with her shoulder, ankle, wrist and toe and the only time she fussed was with the toe. Hooray! He said it doesn't seem swollen at all so is probably just a mild sprain. He said it is very very rare for OSA to spread to a toe, so not to worry. He said to give her tramadol for the pain and only do short leash walks in the neighborhood for a few days. No beach. But that is good timing as Fiesta Island is closed for 3 days because of some big silly boat race thingy, so we couldn't go there anyway. If all goes well she can go back to the beach next week. :)

In other good news, he listened to her lungs for a good long time and said they sounded great. He said if we didn't know the mets were in there (damn Boris & Natasha!) he wouldn't be able to tell there was anything wrong with her. In additional good news, she weighed 47 lbs, which is great as we are trying to get her weight up just a bit. To celebrate all the good news, Abby and I stopped at Arbys and got a roast beef sandwich for lunch. We stopped at the park and shared it. :)

Next appointment will be for x-rays to check on Boris & Natasha on Oct 28 – just one day shy of her one year ampuversary!!

Sorry I have no pics of Abby to share today. I hate to have a post without any pics, so I'll just post this drawing I did that I put up on Facebook and on the Tripawds site, so most of you have already seen it. We've been joking lately on the Tripawds forums about "Tripawd Girl Power" and how our hero girls needed some pink capes, so I did this drawing of some Tripawd Warrior Princesses (TWP) - that is Abby in the middle. 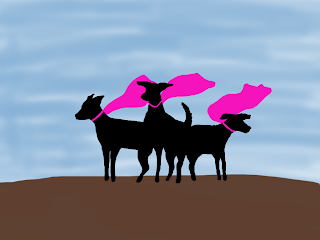 One of the ladies ran with my idea and made a pink cape for her TWP, Lylee. Here is Lylee modeling her cape (with sparkles even!) at a Tripawds get together in Northern California. Wish we could have gone! 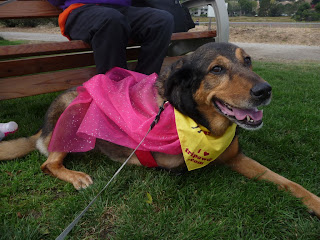 Unfortunately, Abby didn't have a pink cape to wear to her appointment today, but she wore her Tripawds bandana instead, and I'm sure it brought her good luck.

Thanks for reading and thanks for thinking good thoughts for our girl!

* The US won! The matches are on Universal Sports Network - you should check one out. It makes American football look like powder-puff girls.