Today, for Monday Mischief, I wanted to do a belated shout-out and offer some camaraderie to Jen at My Brown Newfies, who recently did a hysterical post on National Slobber Appreciation Day. As you probably guessed from her blog name, she has two Newfies who are master craftsmen in drool production.

Of course, I immediately thought of my "nephew", Leo the mastiff and shared the link with my sister-in-law. (She was very happy to learn the tip that Mr. Clean Magic Erasers are great for cleaning dried drool off walls.)

I don't actually have a picture of Leo drooling (sorry, I know you'd love to see that) but I do have one of him sleeping. 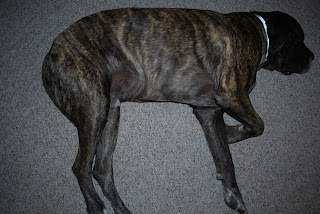 I think he's dreaming that he's a Lipizzaner Stallion.

Ciao to My Chow Hound?

What Happened to My Good Eater?
Rita, as far as we know, is a German Shepherd/Beagle mix. Until very recently, her beagle side has really shown through any time there's food in the picture. This was a welcome change (back to what we were used to with our beagle, Bailey) from Abby, who was obsessed with keeping her super-skinny super-model figure.

But, about 6 weeks or so ago, a weird thing happened. Suddenly Rita wasn't such a chow hound anymore. You might remember we won a sample of Honest Kitchen and she loved it, so we bought her some and had started mixing it in with her Blue Buffalo kibble. For a couple of weeks, she was all over it, licking her bowl so hard that it would slam up against the wall. But then she just went off of it.

I tried just the kibble. I tried just the Honest Kitchen. She didn't seem to want either one. Around the same time she went off peanut butter, which every dog I've ever known loves. She used to love it herself! The other night we made pizza, and she turned her nose up at the "bones."

The only way I could get her to eat was if I cooked something for her myself and mixed it in with her kibble. So, if we were having chicken, I'd set aside enough for a few meals worth for her and boil it along with some greens and then dice that up with her food. Or I'd do the same with some fish or turkey. I'm not a great cook - but she LOVED it! (It's nice to have someone enthusiatically gobble your cooking!)

As I said, this has been going on for weeks now, and I had been trying to figure out what the heck happened to her appetite. But I finally figured it out! When she got the diagnosis of the panosteitis, one site I looked on said that dogs who have it can become depressed or even anorexic. Well, she'd actually gained some weight from all the laying around and not exercising, so that didn't really make sense to me. But, I started to think, maybe the only reason she didn't become anorexic was because I started trying so hard to vary her meals and mix in some home cooking that she kept eating her meals. Plus, she never went off her treats - I mean, she's not crazy.

Anyway, while I was writing up this post I searched again on panosteitis and, more specifically, whether it affects the appetite - and it does! In fact, the site I found said loss of appetite is usually the first symptom. Now it all makes sense!

Rita Wins Again!
So, winning the Rachel Ray "Naturally Delish" dog food from Jen at the My Brown Newfies blog could not have happened at a better time! Rita loves a little bit of it mixed in with her kibble. (I have to mix it up really good or she eats around the kibble...)


I have no idea what this new Rachel Ray food costs, but I think it's available in grocery stores, which is handy, and it also comes in resealable tubs, which is also handy (and way better than dealing with an opened can of food). Plus it's made with no fillers, meat by-products, artificial ingredients or preservatives, plus no corn, wheat or soy, and 100% of the proceeds go to help animals in need. I'd imagine it would be pretty pricey to feed your pup this alone, but it's been great for mixing a bit in with Rita's dinner to get her appetite going again.

So, thanks to My Brown Newfies and thanks to Rachel Ray for the yummy* goodies for Rita.

Hopefully we'll get our ol' chow hound back one of these days!


* I should probably say "yummo" instead of "yummy", as a nod to Rachel Ray since that's what she always says... but my bro is not a big fan of Ms. Ray,** so I'll stick with yummy. Or I'm also partial to yumma.

**My bro is a great cook and therefore watches the cooking channel a lot. I think he doesn't like her because she is so darn chipper. Chipper is not really a word that would ever come to mind if you were looking for a one-word description of my bro. Plus, I'd say his cooking style is more Alton Brown than Rachel Ray, so he's just not into the whole 30 Minute Meal thing - he wants to make the 8 to 10 Hour Meal. Seriously. He needs his own cooking show. We keep telling him he should pitch it to the Food Network - we even have the title already: "The Surly Chef". There'd be none of that constant patter. Instead he'd just cook and occasionally explain something. If the cameraman got in his way, they'd have to bleep out a lot of expletives. (Even if the cameraman didn't get in his way they'd probably have to bleep out a lot of expletives...) But the food would be amazing!

Posted by Jackie Bouchard at 8:03 AM 8 comments: