In homage to Rita, our Mexican jumping bean, and this photo that I posted of her on Monday... 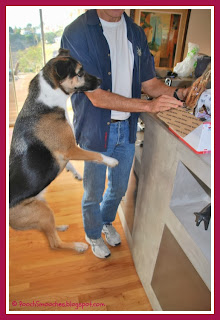 ... I thought I'd post a hoppy video. And this one just happened to cross my path yesterday. This is a lot like how Rita looks when she's amped up about something. Luckily she doesn't get amped up too often!

It's All About the Ears... And the Meatballs


Today, Rita got some very special mail. Remember when we hosted Barney last summer? Boy, there was a lot of blog fodder there! Well, just like Barney is meant to spread joy (and a desire to kill the stinky purple beast) amongst Tripawds, "Monkey Me" Elmo is on a mission to spread joy (and sometimes meatballs) to Monkeydogs (aka: Monkeybutts, Monkeybunnies, or Monkeybutt Bunnies), the often beleaguered four-legged siblings of Tripawds.

Elmo began his tour, officially the World Tour of Monkey Me Elmo – It's All About the Ears!, last year in Sin City.  He didn't just start there cuz it's a hip and happenin' place for a party animal like Elmo, but because the leader of the Monkeydogs, Rocket - the MBBVP himself, lives there. MBBVP (the MonkeyButt Bunny Vampire Pirate) appears here in this video of Elmo kicking off his world tour.

[Let me just interject here... I know it might seem like Tripawds people have a little too much time on our hands, but when you are going through the loss of your pup's leg - especially if it is due to cancer - it helps to have a lot of silly folks around making you laugh!]

Anyway, Elmo mysteriously disappeared for a while in the Windy City, only to later reappear in East Tennessee, sans one eyeball. I'm not sure what happened, but maybe he wanted to have some empathy for Tripawds. (Unlikely, since Monkeydogs are all about having no empathy and tolerating no special treatment of Tripawds!) Luckily, after some reconstructive surgery in E.T., he's back on the road, with his pirate scarf over his missing eye.


Even though Rita doesn't live with a Tripawd and therefore doesn't have to compete with one for treats and car rides (translation: pills and trips to the vet), she does sometimes seem to tire of hearing about how great, wonderful, pawesome, beautiful, amazing, etc. her angel Tripawd sister Abby was. So, she was pretty excited to get some mail that was all her very own today.

Even better than a stinky Monkey Me Elmo and his traveling companion, Curious George (or is it Bi-Curious George... They were alone in that box together for a long time...), the box came with MEATBALLS!

Yup, this Tour is All About the Ears for Monkeybutt Bunnies.

Stay tuned for more of Elmo's adventures in San Diego!

In other book-related news... 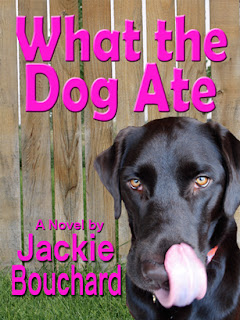 The print version of What the Dog Ate is progressing! I spent the last two days obsessing about fonts (for the text, the title page, even for the page numbers!), but I think the formatting is all set and ready to rock and roll. So, on to the next step - submitting to Amazon's CreateSpace print on demand service and making sure it looks okay. I'll keep you posted!

Also, thanks to everyone who voiced/typed/posted their opinion on which "author shot" I should use on the back cover of the book. The winner, by far, was the black and white of Rita and me together, so I sent it off today to the book cover designer!

Finally, I got interviewed on the Manga Maniac Cafe blog the other day. My favorite question was "What are three things Kona would never eat?" You can check the link if you want to know the answer!