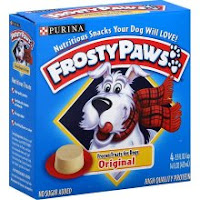 I think Abby ate the bird because she is sharpening her skills in the hopes of participating in the Kill Barney Tour. (I heard once that birds are related to dinosaurs; I assume she heard the same thing.) I only just recently found out about the Tour on the Tripawds site, even though it has apparently been going on since January of 2010. Barney used to be one of Jerry's toys that he loved to hate. (Jerry is the original tri-pawwed pooch who's pack started the Tripawds site. In fact, you may have seen Jerry and not even realize it if you've ever seen the PBS Nature series episode on "Why We Love Cats & Dogs.") Anyway, since the tour began about 18 months ago, Barney has been to 22 different places. He's well-traveled, that Barney. You can even check out the Kill Barney Tour Map and see where all he's been. He's never been to San Diego, so I think it's about time he visits!
So, Abby and I entered our plea on the I Want Barney blog on the Tripawds site. You can read the specifics of what we said here if you are so inclined, but basically Abby offered to show him a good time, let him sink into a false sense of security... and then kill him. I, on the other hand, offered to sew him up so he can go on to the next tripawd who wants to rip apart that insipid little dinosaur. I think we have a shot, but there might be one or two other tripawds who have called dibs ahead of us. If we get Barney, I'll certainly be blogging about it here!
In doing a little research for this post, I found that there is an entire "Anti-Barney Humor" page on Wikipedia. I also learned there that the folks who are behind Barney can't come after you if you use his image in parody. They tried to go after the San Diego Chicken for his attacks of Barney (gotta love YouTube - you can view one such attack here) but lost.
Finally, I posted a couple of videos of Abby on YouTube, including this one of her playing with her friend, Lola, at Fiesta Island. We went to F.I. today but I didn't bring my camera along. Too bad, because Enzo was there (the little cutie from my previous post) so Abby had a great time wrestling with him. Enzo and Lola are pretty much the only dogs Abby likes to wrestle with anymore, so she was happy to see him today. They are so cute together. Hopefully next time I'll have my video camera!
Thanks for reading everyone. These 8 months have flown by!
Posted by Jackie Bouchard at 1:30 PM 5 comments: