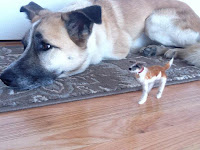 In other non-felting news, I'm upping her artemisinin dosage, since I realized there are MANY different dosage levels recommended and we were at the extreme low end of the recommendations. Upping it slowly and so far she is doing fine on it. In theory, it should act to cut off the blood supply to Boris and Natasha. [Speaking of the Badenovs, someone on the Bone Cancer Dogs listserv reminded me that Boris & Natasha were never very good at carrying out their evil plans to foil "Moose and Squirrel" - said in my worst Russian accent - so hopefully our Boris and Natasha will be the same inept baddies.]
That's about all the news for now. Don't forget you can still VOTE for ABBY here up until the 28th. [The vote totals aren't showing on her page anymore, but you can see them by clicking on "View Gallery" and searching for "tripawd". You can also vote from that page that comes up, but it is a two-step process from there.] Will let y'all know how she does in the contest. She just better make it into the paper, because I have Abby's Army voting for her!
Posted by Jackie Bouchard at 5:55 PM 6 comments: