Each novel I write has its own notebook. It holds various things: a rough outline, timeline, character notes, lists of names, maybe some first-draft scenes when I don't feel like working on my desktop PC, any newspaper articles or photos or other bits of inspiration, etc.

Well, this weekend I realized I'd lost my notebook for Book #4. Aggggh! I figured it was in the house, so looked everywhere. I've been known to absentmindedly set things down in weird places when I'm straightening up and have my hands too full, so I really looked everywhere! (Yes, I looked in the freezer.) 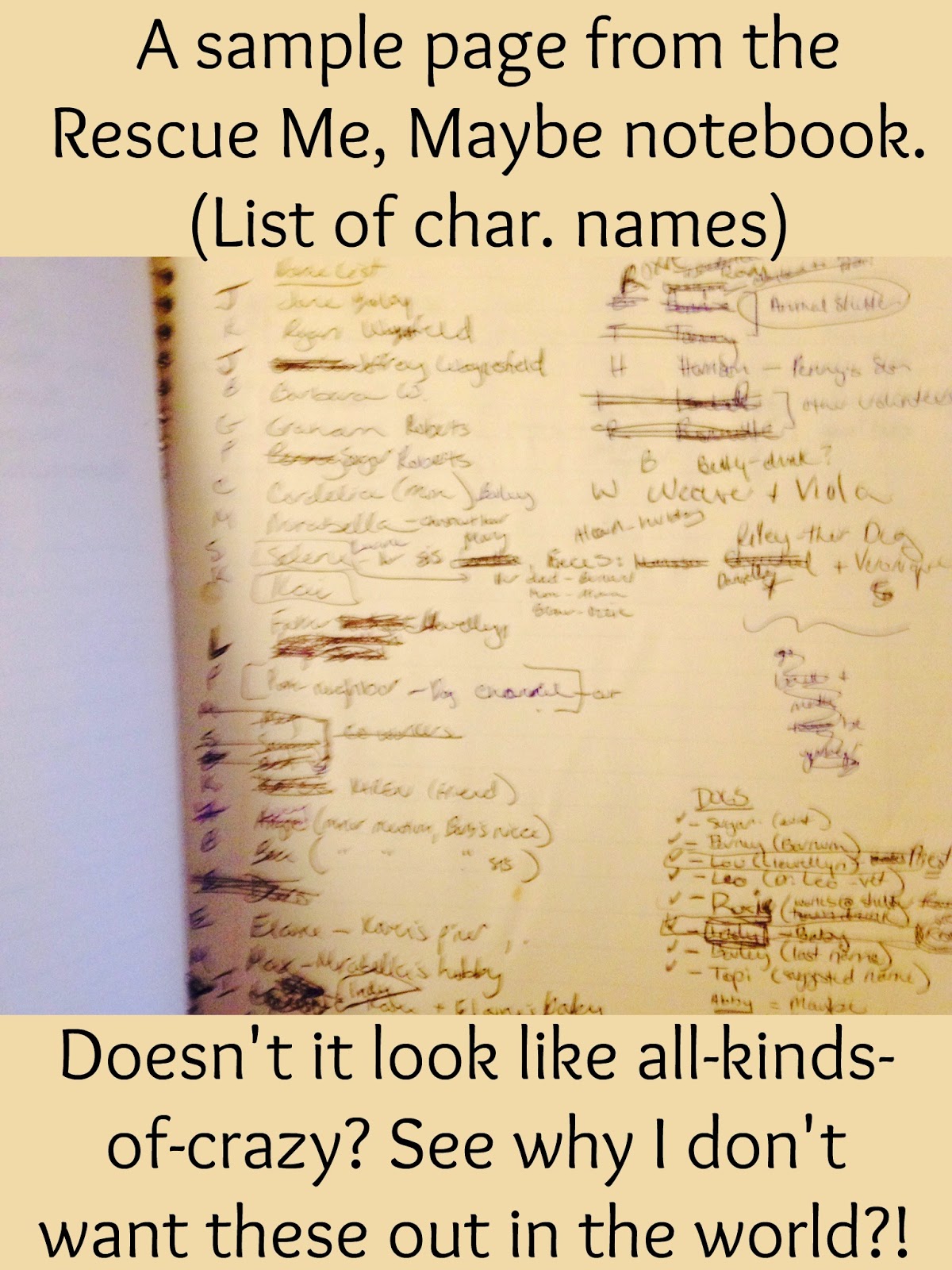 Then I remembered the last time I'd had it for sure was when I met a writer pal at the mall to chat about our latest projects. I'd gone to Macy's after. My small purse wasn't big enough for the medium-sized notebook so I was just carrying it. I used the restroom at Macy's and made a mental note to NOT forget the notebook.

I could see myself walking out of that restroom with the notebook, so I knew I still had it then. Then I hit sheets, men's shirts, purses, and left without buying a thing. I mentally walked through all those departments again, trying to picture whether I had it in my hand at each stop.

I called Macy's and talked to Customer Service, who checked the Lost & Found. Nada.

I was kinda freaking out. It wasn't so much that I was worried about recreating what was in there. And it also wasn't that I thought someone would steal my "great" idea, but... it was just the thought of someone reading my stuff!

I know that probably sounds weird since people read my "stuff" (novels, blog posts) all the time. But reading very first-draft-y scenes. Ugh! And reading the whole synopsis of the book! Double ugh.

Have you ever been robbed or had someone read your diary? It felt like that. Not that I would know about the diary thing since I never kept one, but I had an apartment broken into once, and I just felt so ... creepy about some stranger touching my stuff.

Then, last night as I was falling asleep, I remembered... On the way from the sheets on 3 to men's shirts on 1, I'd stopped on the 2nd floor to try on a cute jacket. I had only seen the jacket because you have to cross the women's clothing section to get from the one down escalator to the other (sneaky store designers!). I remembered laying the notebook down while I tried the jacket on in front of a mirror. Well, I left both the jacket and the notebook behind.

So, today I went back to department at Macy's. The notebook wasn't where I'd left it, but I headed for the nearest cashier, and there it was!

I was so excited, I bought the stupid jacket to celebrate. (And I also since then just happened to have bought a bigger purse, which the notebook fits in!)

This whole thing reminded me of the time my mom lost her purse at the Wild Animal Park. And she was due to get on a plane and fly home the next day. Of course we checked the Lost & Found, and, again, nada. Well as we found out a day later (after a ton of hassle of canceling credit cards and calling the airline, etc.), the nice lady who found it didn't trust the folks at the L&F to get the purse back to my mom, so she took it home with her and searched through it until she found my sister's phone number.

The moral of this story is, if you're the finder of something, take it to the Lost and Found! Cuz that is where the loser is going to look!

Sorry about no dog-ness in this post. Just to add some, here's Rita with my recovered notebook. 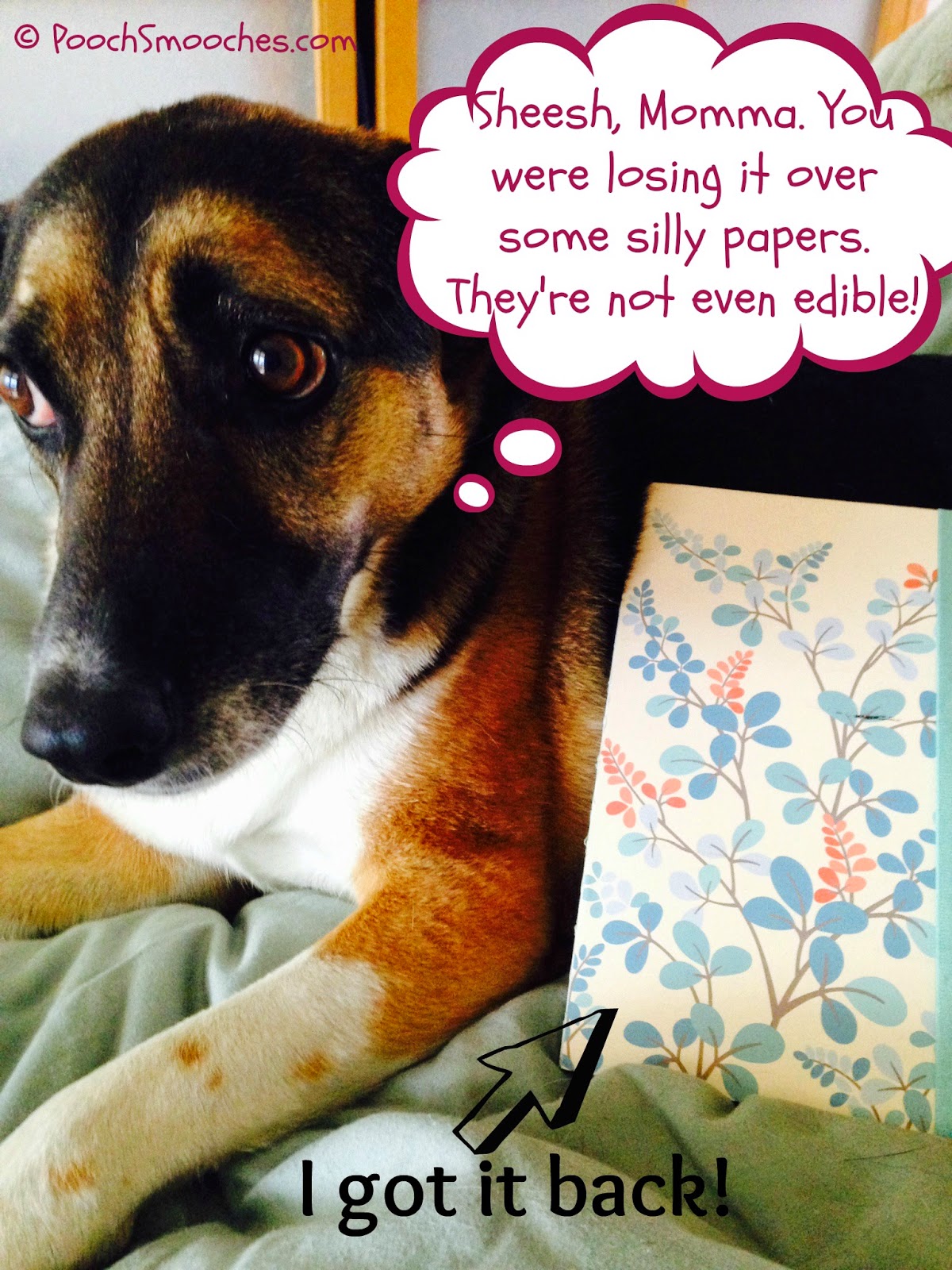 Our little furry angel actually got up to some mischief this week! But... I'll write about that next week, cuz I'm not sure she's done. (Will explain what that means next week.)

Have you ever lost something that just made your heart sink when you realized it was missing? (Heaven forbid that thing was your pet! We "lost" our beagle a time or two, but we always quickly found her with her head down one of the rabbit holes behind our house. Should have named her Alice!)