Downs
OK, so... it's been a bit of a stressful week. In my last post I mentioned we took Monday off from the beach because I was worried about Abby's leg and lack of stamina. Well, Monday night, after having a bad bout of tummy trouble, she was suddenly her old self - racing around, play bowing, jumping on me, etc. She seemed totally fine, so we met up with her buddy, Dakota, at the beach on Tuesday like usual. She was OK at first, but then started stumbling again. We turned back way early but she still was stumbling and breathing a little heavy and laid down several times, which is NOT normal. I was very upset the whole way home and imagining terrible things…

Ups
While I was waiting for Dr. V. to call back, she started furiously licking one toenail and then she jumped up to race around and chase a fly! So, I figured either she is the most stoic dog ever, or there's no spread of cancer to that leg (which is what I had imagined)… Dr. V. thinks it is just a combo of things all hitting at once: the heat sapping her energy, bit of a tummy issue (maybe ate/drank something funky at the bay) also sapping her energy, plus a problem with her toenail and/or a strained wrist. I think she may have slightly torn a toenail at the base, which if you think about it, would hurt like crazy on the uneven surface at the beach - not to mention the sand and salt water getting in there. So the last two days we have just done short walks in the neighborhood and she's done OK with that. Tomorrow we will attempt the beach again, but plan to take it a little easy.


Monkeybutts
It's been a rough couple of days, but as usual the folks at the Tripawds.com site help you through these things. One of things I love about the Tripawds community is that there are some darn funny people on there. (Gee, using humor to deal with adversity... who'da thunk it??) Well, one of the funniest folks on the site made Abby a special video for her 10 month ampuversary, which I've included below. But before you watch it, I have to explain about Monkeybutts...

Monkeybutts (Latin: canis monkeyanticus familiaris OR canis lupus jealousicus) are other dogs (or cats or ferrets, etc.) who live in the house with a tripawd and get up to all sorts of antics due to their jealousy over all the special attention tripawds get - like car rides! (trips to the vet) and treats! (pills hidden in food). The Monkeybutts try to stir up friendly trouble with the AMBF (the Anti MonkeyButt Forces) on the Tripawds site. Abby is a proud member of the AMBF! The Monkeybutts' leader is this little tyke pictured to the right: Rocket, aka "Monkeybutt-Bunny Vampire Pirate". He is the one who made the video for Abby - which is why (as you'll see) it is not the...er, love message you might be expecting.


Abby explained to Monkeybutt that she saw the hidden message in the video... Just like god backwards is dog, she figured out that NOT backwards is TON and that Monkeybutt-Bunny was really trying to say that he likes her a TON! (I may have left you all with the Barney song in your head a couple of posts back; now just try to get this ditty outta your head!)

One More Little "Up"
Today Abby and I went and got sandwiches and then hijacked Mike from work and took him to the park for a wee picnic lunch and a nice stroll/hop in the sun. It was very nice. 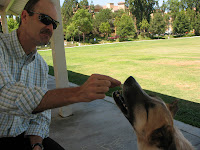 And One More Big "Down"
Hate to end on a sad note, but I wanted to mention to please send good vibes out to Chili Dawg's family. Chili Dawg was the tripawd golden that we sent Barney on to. Sweet Chili didn't make it. (You might not want to click this link unless you have tissues handy...) He had an appointment with heaven that he couldn't miss. He didn't even get to have much fun with Barney, and had to let his monkeybutt brother, Finchy the boxer, try to kill Barney. The Tripawds folks are all very sad about the loss of Chili, a great Tripawd Warrior.

Posted by Jackie Bouchard at 7:43 PM