...which is not the same as going ballistic... "Halflistic" is the word I made up for our new not-wholly-holistic approach with Abby. We are going to blend conventional/Western meds with some Eastern supplements. Yes, we are going East-meets-Westy on her. Here is my illustration of that:
[This is my first attempt at a "Brushes" sketch - Brushes being an app for my new iPad. I'm not very good at "painting" with my fingertip yet... as you can see, since that doesn't really look like a Westie at all, but it's an approximation of a Westie anyway...]
I discussed all this with Abby's oncologist, Dr. V. at the Vet Cancer Group yesterday. I told him about how I'd thought she was not doing well on the Palladia, which led to a bunch of panic-stricken research. He was very open to everything I brought up. Of course, he does think some folks out there are just trying to make a buck off your fear of the cancer in your dog, so he doesn't recommend trying just any old thing, but all the supplements I discussed with him he was OK with. He said if it were his dog, he'd have him on "everything but rollerskates" to try to make him better.

We are going to start with upping her fish oil, since the Omega 3s are supposed to be very good for cancer patients. We'll be doing that slowly, since we don't want it to lead to GI troubles. After that, we are going to add in K9 Immunity, which some of the folks on the Tripawds site say they seemed to have good results with. It's made from mushrooms, which apparently turn your white blood cells into little cancer-cell-fighting Ninjas. (Sorry, I don't have an illustration for that. Maybe that will be my next Brushes sketch...)
I won't go into all the details of the other stuff, unless we have some great success with things and folks want to know what we used. Hopefully... months and months - maybe even years - from now, we can share our secrets of success and Abby's longevity with folks. If anyone does want details of stuff now, just let me know. I could email you info. (Oh, and, at least for now, Abby is back on the Palladia and her stomach seems to be fine.)

In other photo-journalistic news, some of you will have seen this already on my Facebook page, but I captured a photo of the Rapture. (Luckily I captured it before the naked believers started getting sucked up in there...)

And I snitched this post-Rapture pic from here. 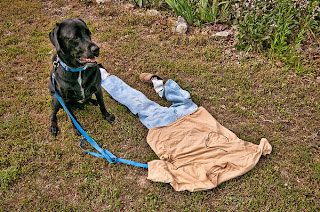 Apparently dogs are not part of the Rapture, which I think is ridiculous since they are probably the most Rapture-worthy creatures out there... Anyway, we have not been, nor will we be, raptured, so no worries about Abby being left behind to fend for herself. There are some very thoughtful Christian folk whose heathen friends will take care of your pets post-Rapture for the low low price of only $10. (And, what... I guess you must also need to send them a key to your house too...no? Or else how will they get in and get your dog? Plus a duplicate car key, just in case you are raptured right out of your sedan and Fido is left locked in the back seat...) If I see a bunch of dogs running loose, I plan to bring them home for a big party where we'll cook all the meat in the freezer and await the final apawcalypse.

Thanks for reading. Hope your day is rapturous.
Posted by Jackie Bouchard at 2:30 PM