I know I sounded all optimistic about Abby and how she's doing in yesterday's post... but then this morning (after only being back on the Palladia for one dose) her diarrhea troubles were back. Damn. So I started worrying about having to take her off the Palladia (we are definitely not taking it again - at least until I talk to Dr. V. at her next appointment Friday the 20th) and then I started to worry that The Lone Met would turn into a big ol' bad-ass tumor without Captian Palladia there to keep it bay. Worrying worrying worrying.
Then, also today, some holistic options came up via various channels... and then I started freaking out that maybe we never should have been giving her the Palladia/Cytoxan in the first place! Saw some info online (not the actual research but comments on research) that chemo can do more harm than good because basically, whatever cancer cells survive the chemo become even more aggressive and actually end up promoting metastasis. [Also found what seemed to be the original research about that later on on WebMD. It said, yes, the cancer that survives becomes a "healthier" form of the cancer - but it also said it doesn't mean chemo doesn't work - just that you need new, additional treatment options. But...who knows, maybe the drug companies that makes the chemo paid for that article.] I also saw online that supposedly 80% of oncologists in a survey said they would not choose chemo for themselves, even though they recommend it to their patients. No clue if that is really true.
That all prompted a little melt down/freak out. Spent hours on end in front of the computer researching/reading and continuing to freak out. Posted a comment on the Tripawds site and some folks there tried to talk me down from my nuttiness. Tripawds recommends the "Dog Cancer Survival Guide" from Dr. Dressler - who funnily enough works out of Kihei in Maui - which is exactly where we just were... So, I downloaded that and need to start speed reading through it. Seems like there is a lot of good advice in there. I'm also considering doing a phone consult with a holistic vet that comes highly recommended by some of the Tripawds' folks... Adding to my freak out was the thought that we should have been doing more holistic stuff (diet and supplements) from the get-go. Trying not to think "We wasted 6 months when we could have been doing more!!" Trying...
Anyway, not sure where all this will lead - most likely to: dropping the Palladia, rethinking the Cytoxan (although I'm kinda afraid to go wholly holistic - maybe we'll go "halflistic"), maybe to adding some new supplements to her diet, and getting very strict about the grain free/low carb stuff. (She's on a kibble, Blue Buffalo Wilderness formula, that is supposed to be good, but I need to research it more.)
Ugh. I reread this post and it's just a big jumbled mess, but that is how my brain has been all afternoon. This stuff is all so confusing and its hard to know what info you read is right and what is just hype. Thought about not even posting it, but, well, this is the roller-coaster ride we are on. (Dr. Dressler calls it the Cancer Iditarod, which I've stolen for the title of this post.) Will keep you posted on what changes we make to her routine. I just want her to be around as long as possible -- as long as her quality of life remains as good as it's been. (She has a pretty darn awesome life at the moment...)

Speaking of her awesome life, we went to Fiesta Island this morning, as we've done every morning now since we got back from Maui, and she ran like crazy on the beach with Dakota. Then this afternoon, while I was freaking out and doing research on the computer, she was happily napping, oblivious, in the other room.

For today's photo, here's an update on her new toys: (The 7-rated shark has an even bigger hole in his head; the squeaky dog has lost all of its limbs - but it keeps on smiling.) 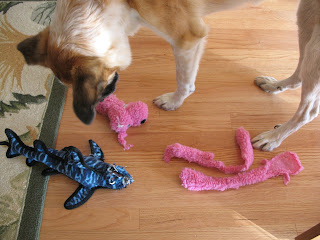 Trying to keep smiling and have a called a moratorium on freaking out.
Posted by Jackie Bouchard at 3:10 PM