Will It Grow Back?

This Sunday, we took Abby to Fiesta Island again. Some little boys came up to us and were interested in her. One of them asked if her leg would grow back. That gave Mike the idea to attempt splicing lizard DNA into her cells, so that her shed limb could be re-grown. If only we had a gene-splicer!
She continues to do great, post-chemo. She's been very spunky - although, I must admit, this was the first time I ever saw her lay down at Fiesta Island. She played so hard with this one little puppy, chasing her up and down the hill, plus chasing birds (videos of both below) that she was wiped out. She had to have a little rest in the sand before we made it all the way back to the car. In the puppy chasing video, you can hear her snarling at the puppy. She gets frustrated when she can't catch another dog, and will try to grab it by the tail as it flies by. (She was that way pre-amp as well...)


Also this weekend, in non-dog-related events, I went with my sister, Jean, to my other sister's house, to paint windows. It's a bit of a tradition that we get together to paint Kath's windows every Christmas. Each year the windows feature Kath's dog, Indy. This year the theme is "A Christmas Dog Story." The windows came out pretty darn cute, if we do say so ourselves. 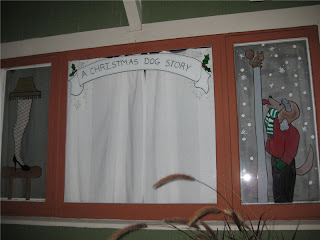 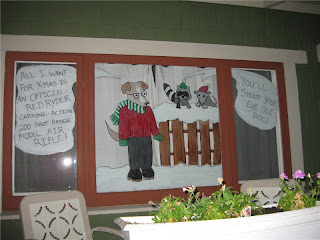 Posted by Jackie Bouchard at 9:14 PM