Spreading Tripawd Cheer (For a Fee?)

Abby, Mike and I have been exploring our new neighborhood a bit. Most of the streets are quite hilly. She looks so cute going uphill: she has to take smaller hops, and her ears bob up and down and it's quite adorable. It's also quite the workout! Especially since it's apparently easier for her to run than hop uphill, so she often breaks into a run. She runs so fast I can barely keep up with her.

The other night we were out walking/hopping along our street, and we saw a man coming up the hill of the side street, head down, staring at the sidewalk. He stopped and said, "Oh!" when he saw Abby, and leaned forward so she could sniff his hand. Then when he saw that she only had three legs, he said, "Awwwww!" I was trying to keep her from jumping on him and kissing him, (as she is wont to do with everyone) but he got down on one knee and let her totally kiss him. He asked us a lot of questions about her, and kept petting her the whole time. He would massage her back for a while, then she'd attack him again with more kisses all over his face and neck.

He told us about how he'd lost his beloved 12-year-old Rottweiler six months ago, and he can't get over it. He still walks the same route every night that he used to do with her. He gave us his business card (he's an electrician) and said, "If you ever go away, I'll watch her for you. And I'll pay you." We could use a little electrical work at the new house, so . . . maybe we can work out a deal. For every hour of work he does for us, he can have/love on Abby for an hour. Fair? 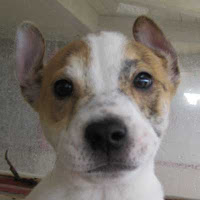 I don't have any new pics of Abby, so I'm instead attaching a picture of this cutest pup that I got to love on at Helen Woodward today. It was my volunteer afternoon. They don't have that many older dogs right now, so all of them had been walked by the time I got there, so I spent my shift doing laundry - to get in out of the cold, wet day - and loving on puppies. This little guy is named Butterfingers. His ears are so cute! If you try to fold them down, they just boing right back into place. Adorable. And such a cuddle bug. I'm in love with him. He better not still be there by next Monday, or Abby may end up with a little brother . . .
Posted by Jackie Bouchard at 8:02 PM