Sorry I haven't posted in a while. Not too much has been happening with Abby, so there hasn't been a whole lot to write about. She's doing well, after that little scare she gave us (in my previous post) with the combined tummy trouble/toe problem/heat issues. We've been taking her to the beach and she runs like her usual nutty self. Her energy and appetite still both seem to be really good, so we are pleased about that!


You probably all heard (and some of you lived through...) the Great San Diego Blackout of 2011. Well, we missed all the excitement. We left town that day at exactly 3:20, missing the traffic chaos by twenty minutes. Whoohoo! We went to spend the night at my sister's, so Abby stayed with aunt Terry and uncle Jon and cousin Lou, the Corgi. We called that night to check on Abby and to see how they were doing in the blackout and heard a LOT of barking in the background. That was when I remembered that Abby goes nuts for flashlights. She has "a thing" for lights and reflections of any kind (sort of an Overly Attentive Light Disorder), and flashlights especially make her crazy. Apparently so do candles. :) So my sis and brother-in-law had the fun of trying to keep her calm with all the flickering lights and flashlight beams!
On the plus side, Terry said they had a lovely walk at dusk and everyone was out and about in the neighborhood (cuz there was nuthin' else to do). Abby was apparently quite the topic of conversation with neighbors they had never met before. Ah, three-legged dogs... bringing folks together. (In that picture to the right, she is resting on the daybed that she's not supposed to sleep on without a cover on it, but she gets away with a lot since she is the sweet cancer puppy... Besides, she looks cute on it!)

In other non-Abby news, but in cute-photo news, Mike took Tuesday off and we went to the zoo. I was a little worried it would be boring since it was mid-morning by the time we got there and sort of warm, but the heat was a good thing since we saw a lot of animals in the water, even some of the elephants which was very cool. The best were the polar bears, so we watched them for a long time. The one bear had a bone that she was totally batting around underwater, like it was a volleyball. 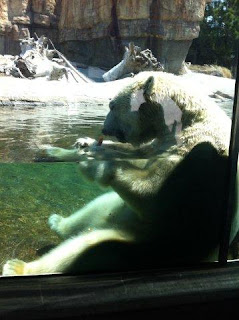 This big ol' polar bear grabbed a mouthful of carrots off a rock and then sat in the water right in front of the window eating them. If you click on the pic and see the bigger version of it, you can see what a slob he is -- there are carrot crumbs all over his tummy. I can relate to that. Although, with me it is usually something more like cookie crumbs...

That's about it for news around here. Abby has a follow-up appointment on Friday. It shouldn't be a big deal - no x-rays this go round - but keep fingers and paws crossed please that when Dr. V. listens to her lungs and heart everything will sound good!
Posted by Jackie Bouchard at 5:16 PM 3 comments: