Is your household as excited about the start of  season 3 of Downton Abbey this Sunday as ours is? (Well, as I am? The hubs watches it with me, but I'm not sure he's as excited about it as I am.)

Do I need to ask who your favorite character is... It's gotta be the Lab, right? Don't you love this shot from the opening credits of that ample little Labby butt walking alongside Lord Grantham?
So... I thought for this post I'd try to find some fun tidbits to share like, say, the fact that there's a Facebook page dedicated to Pharoah and Isis - the two Grantham family Labs. That's right, two Labs. Did you notice when they went from Pharoah (a male played by Roly) to Isis (a female played by Ellie)?

Apparently the male blonde Lab that lives at the castle used for the Downton set doesn't get along with other male dogs, so poor Roly had to go. The plan at first was to just switch in Ellie, but someone said that surely sharp-eyed fans would notice that Pharoah had gone from male to female! (Um, I probably wouldn't have, but I'm sure someone would.) So in the second season, they said that Pharoah had passed away and Isis was the new family dog. 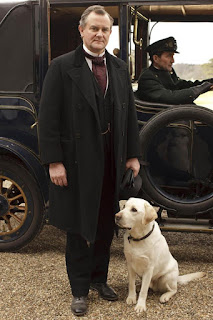 In true celebrity gossip fashion, Hugh Bonneville (the actor that plays Lord G.) seems to be sending out mixed messages about his lovely blonde co-star. He was quoted in The Daily Mail in 2011 as saying that Ellie's a "very good-natured dog" but with a "very different temperament to Roly." He went on to say, "All he [Roly] wanted was a frankfurter and he sat there, staring lovingly as his owner. All Ellie wants is a frankfurter, too, but her tail constantly wags, knocking over beautiful antiques." So what you're really saying is that she's disruptive on set, right, but couching it in a compliment (a "very good-natured dog").

However, does the real truth come out in this report by The Sun in the UK (if you considered linking through here, don't until you read to the end!) in which Bonneville calls Ellie the show's "biggest diva" and a "total bitch." According to the report, "She rarely comes out of her trailer and demands snacks at all times.”

So, which is it Hugh?? Is she a bitch, demanding cookies, or a good-natured dog, demanding frankfurters?

I wanted to get to the bottom of this, but while reading the report in The Sun, which is from October, there was a major plot spoiler, since the season has already aired in the UK. I also saw another major spoiler just while searching for more tidbits on the dogs, so I gave up! I'm hoping both these spoilers can't possibly be true. (I'd heard a major character dies this season - but from what I saw two of them will die. Unless one of things I saw was incorrect, in which case... one of them will die, but now I'm not sure which one. Kinda hoping it's the one and not the other. Is that mean?)

Anyway, I can tell you that I didn't see anything saying that Isis will die! Phew!

So, how about you? Will you be watching Lord G and Isis with your faithful pup at your side? Are you excited to see if Lady Hairy will actually manage to wed Matthew Clawley without anymore star-crossing of their love? Can you not even wait to see if Mr. Bites will beat his murder conviction? We will definitely be watching with Rita!